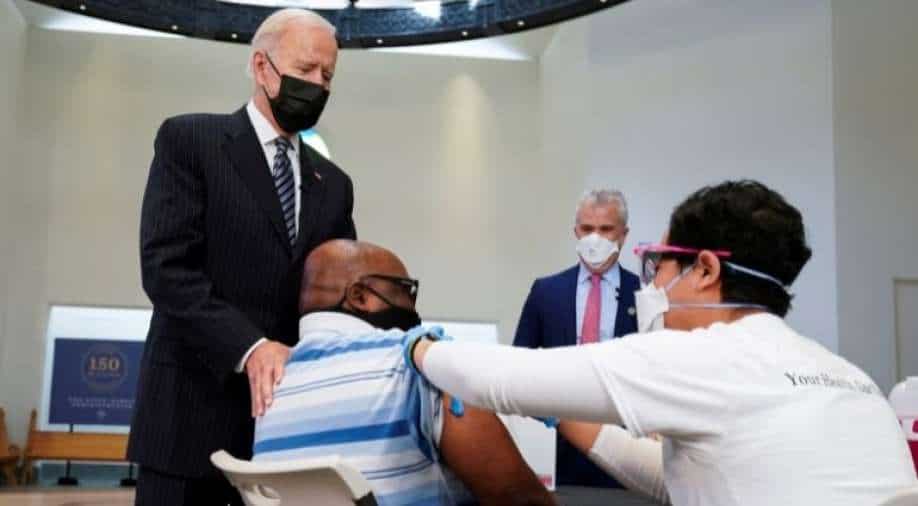 FILE PHOTO: US President Joe Biden puts his hand on a man's shoulder during a visit to a coronavirus disease (COVID-19) vaccination site at Virginia Theological Seminary in Alexandria, Virginia, US, April 6, 2021. Photograph:( Reuters )

While officials across the country have offered free beer, concert tickets and millions of dollars in lottery winnings to encourage vaccinations, residents of the Rio Grande Valley in South Texas have needed little prodding

Gabby Garcia did not expect to feel like crying when she sat down for her first dose of the coronavirus vaccine. But as the long needle pierced her skin, she thought back to the agonizing outbreak in her family that killed her sister, hospitalized her brother and also left her ill for days.

“It was a sense of relief, ‘I’m getting it,’” Garcia said of the vaccine. “It was the sense of what if? What if this had been available sooner? My sister’s death and us getting sick definitely motivated me to get the vaccine.”

While officials across the country have offered free beer, concert tickets and millions of dollars in lottery winnings to encourage vaccinations, residents of the Rio Grande Valley in South Texas have needed little prodding. Exposure to death and disease has been enough incentive.

The four-county region accounts for nearly 10% of the state’s some 52,000 deaths from the coronavirus. But today, deaths are significantly down, as are case numbers, and vaccination rates are higher than both the broader state and national averages. In one county, about 70% of residents 12 and older are fully vaccinated, according to state figures and a vaccine tracker by The New York Times.

“I think pretty much everyone in the region knew someone who died from COVID,” said Dr. Michael R. Dobbs, vice dean of clinical affairs for the University of Texas Rio Grande Valley, which operates the region’s only medical school. “So people wanted the vaccine.”

At its height last summer, the coronavirus tore through the region. Hospitals were overloaded with patients, many of whom waited hours to be seen. Funeral homes were so busy that many needed large refrigerators to store bodies for several weeks. On its worst day, Hidalgo County, the most populous county in the valley, reported the deaths of more than 60 people, reaching a coronavirus death rate of 5%, more than double the 2% national average.

So when vaccines became available, people scrambled to line up. They flocked to area schools, fire stations and even flea markets, or pulgas, where local residents gather in large numbers. They slept in parking lots, jammed phone lines and showed up without appointments pleading for a leftover dose, health officials said.

“Older people really feared death,” said Dr. Emilie Prot, a regional medical director with the state department of health. “A lot of times we needed to turn people away.”

High death tolls elsewhere in the country have not necessarily translated to high vaccination rates.

In the Rio Grande Valley, vaccines are part of the region’s fabric, Prot said. Parents understand their children must be vaccinated against diseases like measles and polio before starting school, and that sentiment often translates to adults. She said she has seen patients complaining of upper respiratory illnesses choosing a shot over a pill, which many people here deem less effective.

“In the Hispanic and Mexican culture it’s always, ‘All right, you have to get your shots to go to school,’” she said. “It’s part of the culture that they need to get vaccinated.”

Recent polling supports this notion: According to a NPR/PBS NewsHour/Marist survey of 1,227 adults in early March, 63% of Latinos who participated said they either planned to get the vaccine or already had received it. (But the number of those who expressed hesitancy — 37% — was slightly higher than Black and white respondents.)

While the country as a whole is not on pace to meet President Joe Biden’s goal of at least partly vaccinating 70% of adults by July 4, the Rio Grande Valley is getting close to that threshold.

The vaccination numbers in the Rio Grande Valley are particularly striking at a time when rates continue to straggle in Southern states — and other conservative, Republican-led states — like Mississippi, Alabama and Louisiana, where mistrust in the government is more prevalent.

Across the country, according to voting figures, regions that turned out for Biden have higher vaccination rates when compared with Republican strongholds where elected leaders rushed to ease virus restrictions. Parts of the valley, a long-standing solidly Democratic area that is nearly 90% Hispanic, have slowly shifted to the right. But politics aside, officials said, residents respond to leaders who look like them.

“Down here we are all brown. We had to trust ourselves,” said Ivan Melendez, the Hidalgo County health authority. Melendez and the county judge, Richard F. Cortez, had public bouts with the virus, reminding people that no one was exempt from the threat.

“That memory is still fresh in people’s minds,” Melendez said.

So, too, are the empty chairs at the dining table, the two or three urns sitting next to televisions and oxygen tanks laying about homes. All are constant reminders that vaccines can help save lives.

Garcia, who lost a sister at a time when dozens of people in the region were dying every day, said the close family connections that once helped fuel the spread of the virus are now motivating people to get vaccinated.

After her sister, Margarita Gonzalez, 68, a retired educator who had been battling diabetes, died almost a year ago, the family patiently waited for their turn to roll up their sleeves. In October, a second wave infected several relatives, including Garcia, her husband, two teenage children and her brother, Eddie Garcia, a 56-year-old retired police officer who was rushed to a hospital gasping for air.

“I was afraid that he would die too,” Gabby Garcia said.

Eddie Garcia, who is diabetic and has had a triple-bypass heart procedure, and the rest of the family eventually recovered. They then waited patiently for vaccines to become available. For Gabby Garcia, that day came in February when a local clinic called her at the courtroom where she is a judge and told her they had an extra shot, but she had to come “now.”

“I dropped everything and went there,” Garcia said. One by one, everyone in her family, including her teenage daughter, got the vaccine, all in her sister’s memory.

Even after her death, her sister’s presence lingers. Without telling her family, Gonzalez, known for her annual Christmas tamales feast, had cooked a large batch and put them in the freezer while she was in quarantine.

The family came across the tamales after she died, Garcia said.

“It was as if she knew she was not going to be here with us,” Garcia said. “We did it for her. It’s a personal choice, getting a vaccine. But we hope people continue to get it for the better of the community.”

On a recent day, 14-year-old triplets showed up to get their second shot at a site on the medical school campus of the University of Texas Rio Grande Valley in Brownsville. Brooklyn, Madison and Logan Strader sat next to one another in front of plexiglass and winched as each was jabbed.

“I want to see my friends more,” Logan said, explaining his reasoning.

Their mother, Goldie Strader, a nurse practitioner in a rural clinic affiliated with the university, watched with pride. “I can tell you getting people vaccinated is not a problem down here,” she said. “They are very open to it because everybody saw all the suffering.”

In Starr County, an area dotted with tiny villages and long stretches of open road, at least 15,000 people have gotten their shots at Popular Pharmacy in Rio Grande City, the county’s biggest town, said Cijo James, who operates the pharmacy.

A year ago, Starr County Memorial Hospital made national headlines when officials there convened an ethics committee to help decide which patients to send to hospitals with more resources and which to send home to die after their treatment had run its course.

On a recent day, Martha Torres, a director of nurses, strolled through the mostly empty hallway. Only two patients were recovering in the COVID unit, and both were expected to survive.

She came across another nurse, Conrado Ríos, 55. They walked into a room that just months ago was buzzing with activity. They opened the flower-patterned curtains and savored the stillness of it all.

Ríos recalled how he went from caring for very sick patients to laying in the COVID unit himself, fighting for his life. “COVID was everywhere,” he said.

He turned to Torres and said, “Remember I told you, ‘Please, if I get really sick, please don’t send me somewhere else.’ I didn’t want to die in a room alone. If it’s my time, it’s my time.”

He eventually recovered, was vaccinated and returned to care for COVID patients.

“You knew what those patients were going through,” Torres said.