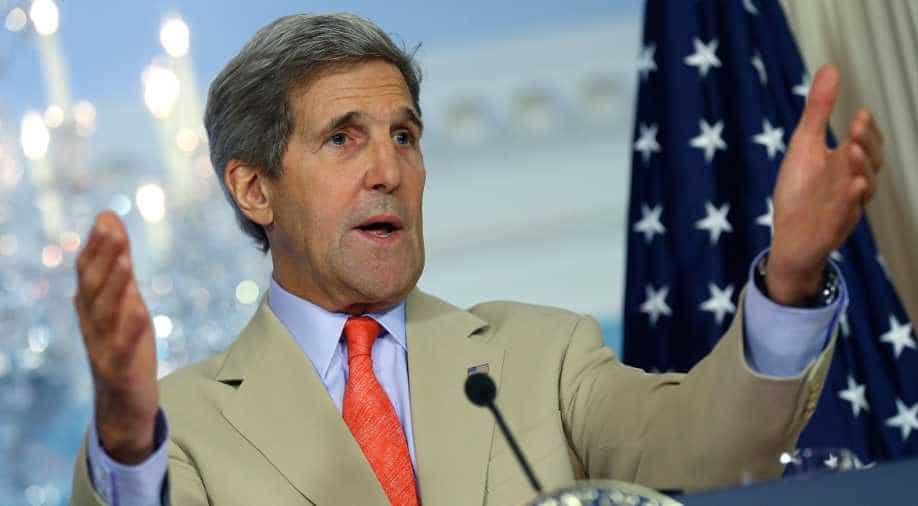 US Secretary of State John Kerry answers questions about Israel's invasion of Gaza and the current situation in Ukraine following a meeting with Ukrainian Foreign Minister Pavlo Klimkin at the State Department July 29, 2014 in Washington, DC. Photograph:( Getty )

US Secretary of State John Kerry on Sunday accused right-wing Israelis of deliberately thwarting efforts to broker a peace deal with the Palestinians.

In unusually stark terms, Washington's top diplomat warned that Israeli settlement building was undermining any hope of an agreement to allow two states to live side-by-side.

At the Saban Forum, an annual gathering of senior Israeli and US policymakers, Kerry said some members of Prime Minister Benjamin Netanyahu's government had made "profoundly disturbing" statements.

Earlier in the day, Netanyahu had addressed the forum via video link, arguing that Israeli settlement building was not an obstacle to peace.

Israel was ready for talks with no preconditions, he said, urging Arab governments to recognise the state of Israel.

However, Kerry dismissed the idea that more Arab states would strike peace deals with Israel without any moves towards an agreement with the Palestinians.

"There will be no advance and separate peace with the Arab world without the Palestinian process and Palestinian peace," he said. "Everybody needs to understand that. That is a hard reality."

In the US government's view, Israel's accelerated building on Palestinian-owned land is not only an obstacle to peace but deliberately so, Kerry added.

"I'm not here to tell you that the settlements are the reason for the conflict, no, they're not," Kerry said.

"But I also cannot accept the notion that they don't affect the peace process, that they aren't a barrier to the capacity to have peace," he argued.

"And I'll tell you why I know that: because the left in Israel is telling everybody they are a barrier to peace and the right that supports it openly supports it because they don't want peace."

US President Barack Obama's administration, which comes to an end next month with no prospect of a revived peace process, has been frustrated by the attitude of Netanyahu's government.

Still, Kerry insisted Israel has no greater friend than Washington. Since he arrived at the State Department in February 2013, he has spoken to Netanyahu on 375 formally recorded occasions for more than 130 hours of discussions, he said.

Washington has opposed all attempts to pressure Israel through votes on United Nations bodies, he added, and has just signed a 10-year $38 billion military support deal, the biggest in US history.