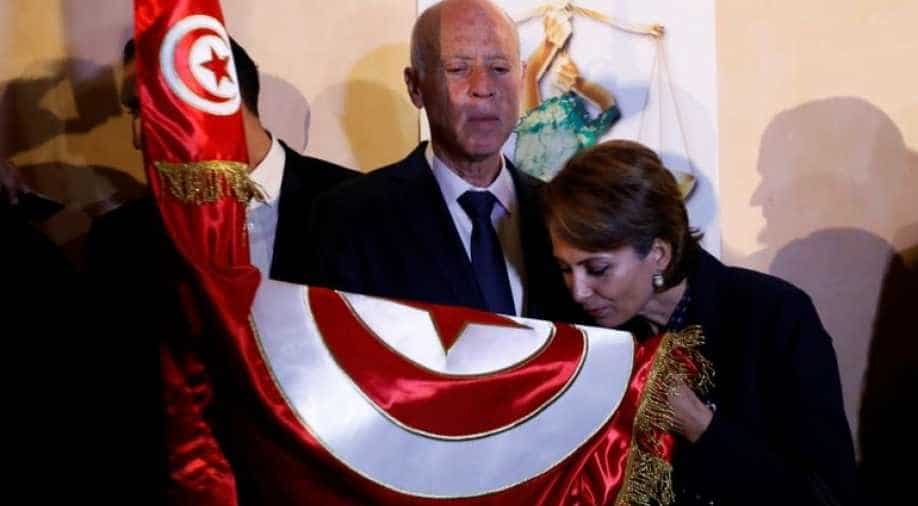 Kais Saied and his wife Ichraf Chebil react after exit poll results were announced in a second round runoff of the presidential election in Tunis. Photograph:( Reuters )

The vote -- the second presidential election since 2014 -- reflected Tunisia's shifting political landscape since the 2011 Arab Spring uprising that ousted an autocratic regime.

Saied, a retired law professor with a rigid and austere demeanour that earned him the nickname "Robocop", was carried to victory by young voters, wooed by his anti-establishment platform.

Around 90 per cent of 18- to 25-year-olds voted for Saied, according to estimates by the Sigma polling institute, compared with 49.2 per cent of voters over 60.

According to Tunisian law, the results can still be appealed within two weeks before the new president is sworn in at the end of the month.

The electoral commission ISIE said turnout was 55 per cent, slightly lower from an initial figure of 58 per cent announced Sunday after the runoff.

It noted however that turnout was higher than during the first round on September 15.

Saied, a 61-year-old constitutional law expert, campaigned on the values of the 2011 revolution, based on opposition to Westernised and corrupt elites, and in favour of radical decentralisation.

The poll, Tunisia's second free presidential election since its 2011 revolt, followed the death of president Beji Caid Essebsi in July.