Jordan searches for survivors after floods kill 20 people, many children 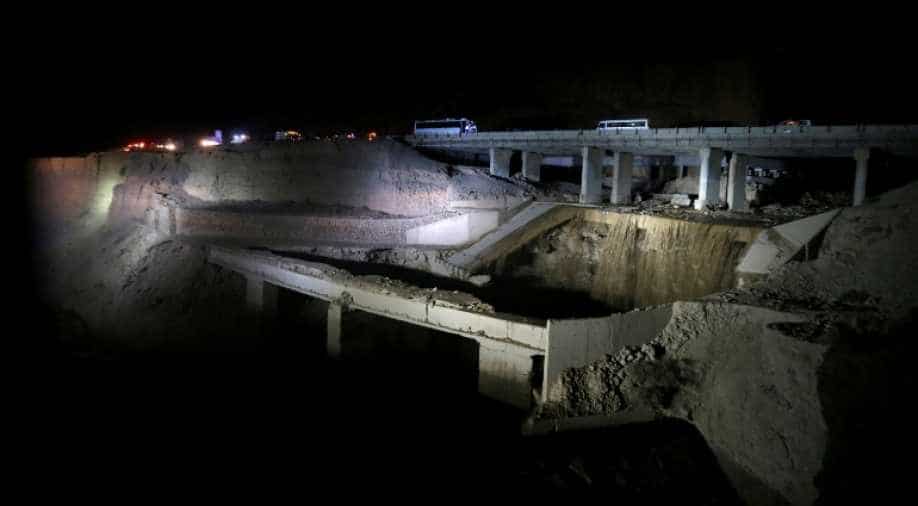 A general view show the location of the accident where people, mainly schoolchildren and teachers, were killed on Thursday in a flash flood near the Dead Sea, Jordan. Photograph:( Reuters )

Thirty-seven people were rescued in a major operation involving helicopters and divers searching for survivors of the floods.

Rescuers combed the shores of Jordan`s Dead Sea early on Friday, searching for survivors after flash floods killed at least 20 people, most of them children on a school outing.

Thirty-seven people were rescued in a major operation involving helicopters and divers searching for survivors of the floods, which swept through valleys to the shores of the area, the lowest point on earth, civil defence sources said.

Among the dead were three Iraqis, two children and a 20-year-old woman who accompanied them on their school bus, a civil defence source said.

Police chief Brigadier General Farid al Sharaa told state television the torrential rains swept away a bus carrying 44 children and teachers who were on a school trip picnicking in the popular destination.

The national flag was lowered to half mast in mourning as public opinion and politicians began raising questions in local media outlets about the preparedness of emergencies services to cope with such a disaster.

Prime Minister Omar Razzaz said it appeared the school had broken regulations by going ahead with the trip, which had been banned in the Dead Sea area because of bad weather.

Health Minister Ghazi al Zibn said most of the injured had left the hospital in the area near the Dead Sea. At least eight people were still missing, a medical source said.

Families of victims had been searching the rugged area after search teams suspended operations overnight for a few hours, a witness said.

A bridge on one of the cliffs of the Dead Sea collapsed under the force of the rains, the first such after the end of summer.

Neighbouring Israel sent search-and-rescue helicopters to assist, an Israeli military statement said. The team, dispatched at Amman`s request, was operating on the Jordanian side of the Dead Sea.

A Jordanian official said Israel had offered to help and the kingdom requested a helicopter with the technology to find buried bodies in mud that would accelerate the searches.

The kingdom, which shares the longest border with Israel and have a common peace treaty, has a long a history of cooperation with its neighbour in natural disasters.

Jordan helped Israel in 2016 with fire-fighting equipment after a rash of fires that burned for days, straining Israel firefighters.