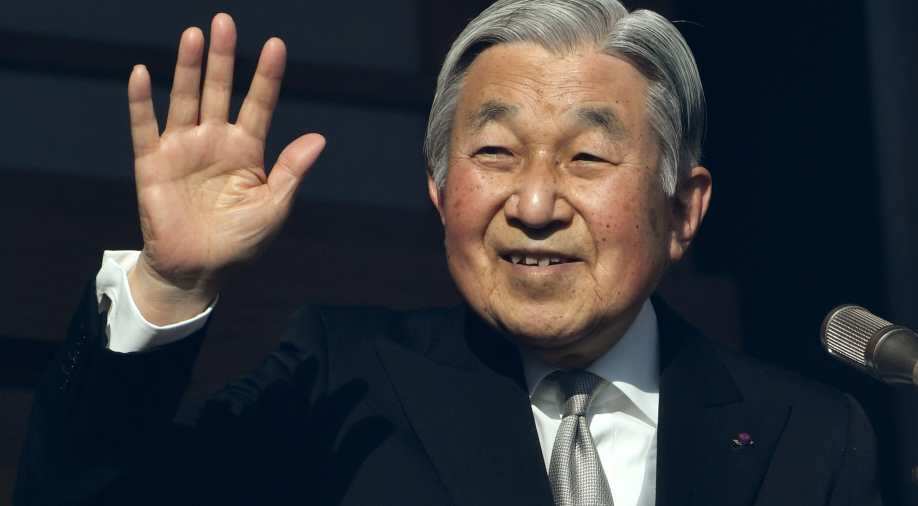 Emperor Akihito, who has spent much of his nearly three decades on Japan's thrones, will step down on April 30, this is the first abdication by an emperor in 200 years. Photograph:(AFP)
Follow Us

Emperor Akihito, who has spent much of his nearly three decades on Japan's throne seeking to soothe the wounds of World War Two, will step down on April 30, 2019 - the first abdication by a Japanese monarch in about two centuries.

Akihito, who turns 84 on Dec. 23 and has had heart surgery and treatment for prostate cancer, said in rare remarks last year that he feared age might make it hard for him to fulfil his duties.

He will be succeeded by his heir, 57-year-old Crown Prince Naruhito.

"This is the first abdication by an emperor in 200 years and the first under the (post-war) constitution," Abe told reporters after announcing the recommendation.

"I feel deep emotion that today, the opinion of the Imperial Household Council was smoothly decided and a big step was taken toward the imperial succession."

The cabinet still has to sign off on the decision on the date, which it will likely do next week.

Once considered divine, Japan’s emperor is defined in the post-war constitution as a "symbol of the state and of the unity of the people", but has no political power.

Akihito, along with Empress Michiko, has spent much time trying to address the legacy of World War Two, which was fought in the name of his father Hirohito, and consoling victims of disasters or other woes.

He is widely respected by average Japanese.

"Both the emperor and empress thought tirelessly about the people," said Taeko Ito, a 72-year-old caregiver. "Now he is elderly and I wish from my heart that he can have a rest."

Akihito and Michiko, the first commoner to wed a Japanese monarch, have worked to reconcile ties across Asia, soured by Japan's aggression before and during World War Two, with numerous visits abroad.

In 1992, he became the first Japanese monarch in living memory to visit China, where bitter memories of the war run deep. During that visit the emperor said he "deeply deplored" an "unfortunate period in which my country inflicted great suffering on the people of China".

Akihito has consistently urged the Japanese never to forget the horrors of war, remarks that have garnered increased attention since Abe took office in 2012 and sought to adopt a less apologetic tone over Japan's past military aggression.

"He redefined the job. He wanted to modernise the monarchy and take care of the unfinished business ... and bring the imperial household closer to the people," said Jeffrey Kingston, director of Asian studies at Temple University Japan.

"He’s been remarkably successful on all fronts. He is deeply admired and respected. His moral authority is unquestioned."

Once Akihito steps down a new “imperial era” will begin, replacing the current “Heisei” or “achieving peace” period which began on Jan. 8, 1989, the day he took the throne.

Japan uses the Western-style Gregorian calendar but has also preserved the ancient custom in which the reign of a new emperor ushers in a new era.

The last time a Japanese emperor abdicated was in 1817.

Post-war law had not allowed for abdication, so a one-off law was adopted in June to let Akihito step down, but it left details such as the timing to be worked out.

An early proposal that he retires at the end of 2018, his 30th year on the throne, was rejected over worries it would conflict with rituals and other duties around then.

Another date considered was March 31, 2019, the end of the business year. But subsequent ceremonies would have coincided with a busy time for many people and nation-wide local elections in early April, Chief Cabinet Secretary Yoshihide Suga said.

Some Japanese lamented that the process was taking too long.

"It's the same for me - life is not so long," said a 79-year-old retiree, Asataro Nishizawa. "They should have granted his wish sooner, while he is still vigorous."

The abdication law did not address the problem of the future of an ageing, shrinking imperial family and the related issue of whether women should be allowed to ascend the throne.

Eleven-year-old Prince Hisahito, the son of Akihito's younger son Prince Akishino, is the emperor’s only grandson and will be second in line to the throne after his father following the abdication. Naruhito’s daughter, Princess Aiko, who turned 16 on Friday, cannot inherit the males-only throne.