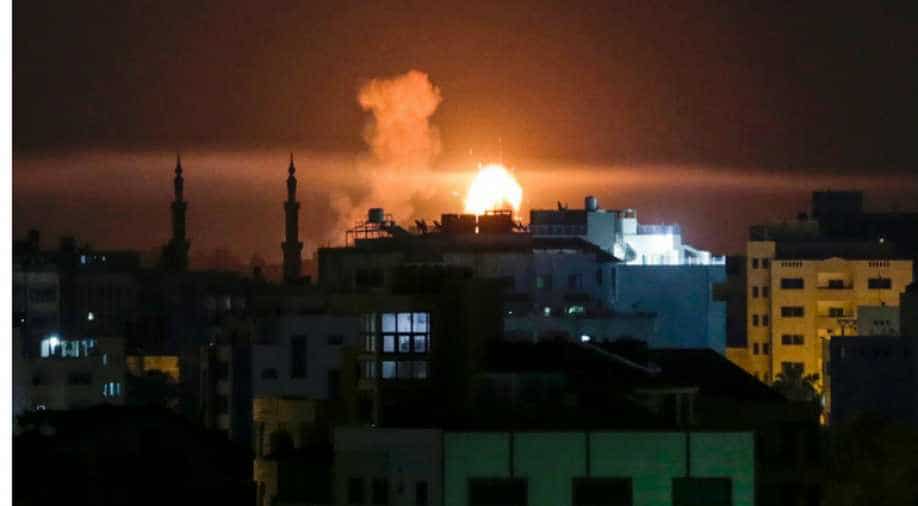 An explosion is seen in Gaza city after an airstrike by Israeli forces. Photograph:(AFP)
Follow Us

Israeli aircraft pounded 10 militant targets in Gaza in response to Palestinian projectile fire, its army said Sunday, shattering a ceasefire reached just days ago after the worst flare-up since a 2014 war.

The latest escalation came hours after thousands of Palestinians attended the funeral of a young female volunteer medic killed by Israeli fire in violence on the border in southern Gaza.

"Among the targets were two Hamas munition manufacturing and storage sites and a military compound," the army said.

The strikes were retaliation to rockets fired at Israel, as well as "various terror activities approved and orchestrated by the Hamas terror organisation over the weekend," the army said.

The army listed a series of attempted attacks at soldiers on the border fence, as well as "damaging security infrastructure and igniting fires in Israeli territory with the use of arson kites and balloons".

There were no immediate reports of casualties in Gaza.

The Iron Dome aerial defence system intercepted one of the projectiles, while the other was believed to have fallen short of its target and hit within Gaza, according to the army.

Early Sunday, two more projectiles were separately launched at Israel. Both were intercepted, the army said.

No group in Gaza claimed responsibility for the projectile attacks, which came a short while after the Saturday funeral of Razan al-Najjar, 21, a volunteer with the Gaza health ministry, who was fatally shot in the chest near Khan Yunis on Friday.

Ambulances and medical crews attended the funeral, with Najjar's father holding the white blood-stained medics' jacket she wore when she was shot, as mourners called for revenge.

Gazans have since March 30 staged border protests demanding the return of Palestinians to land they fled or were expelled from during the 1948 war surrounding Israel's creation, now inside the Jewish state.

The demonstrations have been accompanied by smaller clashes as youths hurl stones at Israeli soldiers and attempt to breach the border fence, at times laying explosive devices on the fence or throwing grenades.

The Israeli army said "a terror cell" had infiltrated from southern Gaza. Soldiers shot at the Palestinians, who returned to the enclave.

The weekend launches were the first since Israel struck scores of militant sites in Gaza earlier this week in retaliation for a barrage of rockets and missiles fired from the territory.

Prime Minister Benjamin Netanyahu said after the strikes that Israel's military had delivered the "harshest blow" in years to Gaza militants.

Palestinian Islamist groups in Gaza, including the strip's rulers Hamas, said a ceasefire deal was reached after the flare-up, although there was no confirmation from Israel.

Addressing Najjar's death, the UN envoy for the Middle East, Nickolay Mladenov, said in a Saturday tweet that "Medical workers are #NotATarget!" and that "Israel needs to calibrate its use of force and Hamas need to prevent incidents at the fence."

The Palestinian Medical Relief Society said Najjar was shot "as she was attempting to provide first aid to an injured protester", with three other first responders also hit by live fire on Friday.

"Shooting at medical personnel is a war crime under the Geneva conventions," the PMRC said in a statement, demanding "an immediate international response to Israeli humanitarian law violations in Gaza".

Najjar's death brings the toll of Gazans killed by Israeli fire since the end of March to 123.

The demonstrations and violence peaked on May 14 when at least 61 Palestinians were killed in clashes as tens of thousands of Gazans protested the US transfer of its embassy in Israel to the disputed city of Jerusalem the same day.

Low-level demonstrations have continued since.

Speaking at Najjar's funeral, Khaled al-Batsh, one of the protest organisers, called on Gazans to "continue the return marches and break the (Israeli) siege with peaceful tools".