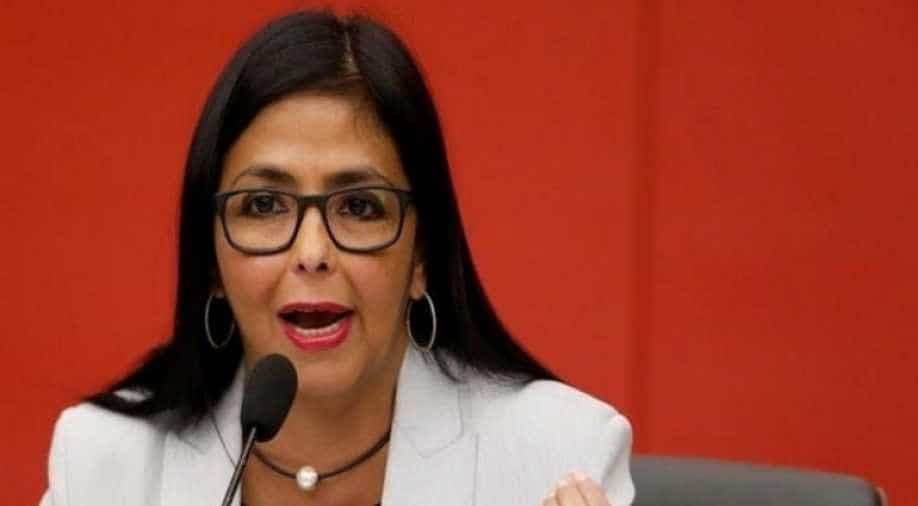 Rodriguez said that humanitarian aid is just an excuse through which the US wants to enter into Venezuela and further create situations of a coup.

The provisions of a humanitarian aid initiated by Washington is a “big lie”, Venezuelan Vice President Delcy Rodriguez said on Saturday (local time), adding that such moves indirectly reflected on the United States’ intention to topple President Nicolas Maduro from power.

In an interview with the Russian Times, the Venezuelan Vice President said, “This [humanitarian assistance] is a big lie.”

Addressing the ongoing political and humanitarian crisis in the country, Rodriguez added that Venezuela’s social “wounds” resulted due to the economic “blockade” exerted by the US. In order to put an end to the crisis, the incumbent government of Venezuela needs to enter into a dialogue with the Opposition, a move which is impeded by Donald Trump-led US government, the Vice President added to her statement.

“We say: ‘yes to dialogue’ and ‘no to war’,” Rodriguez said, adding that the South American nation has been facing “total political and ideological rejection” by the US and its allies (over the issue) including the member nations of the European Union (EU), Canada, Colombia and many others.

Rodriguez said that humanitarian aid is just an excuse through which the US wants to enter into Venezuela and further create situations of a coup. She also accused the Opposition led by Juan Guaido, who announced himself as the interim President of the country last month, to be acting upon the orders of Washington.

“Washington believes that [Venezuelan President] Nicolas Maduro should go. Washington’s response is its distorted doctrine of regime change [in] democratic nations that do not like it when someone twists their arms and forcibly interferes into their internal affairs,” Rodriguez explained.

The Vice President noted that the US is creating a “false positive” impression about its own policies against Caracas, which by no means requires any help from Washington, despite reeling from social and economic problems.

Recently, the Venezuelan army had barricaded the Tienditas international bridge on the border with Colombia and blocked trucks and tankers carrying aid from entering into the country.

The remarks by the Venezuelan Vice President came after Guaido told AFP last week that he could “authorize” a foreign military intervention into the country to topple President Maduro.

According to reports, President Maduro, many times since the crisis began in January has called for dialogue with the Opposition but was turned down repeatedly.

Meanwhile, Guaido has been recognised as the legitimate Head of the State by the US and the EU.

Turkey 'will not back down' in east Mediterranean standoff, says Erdogan