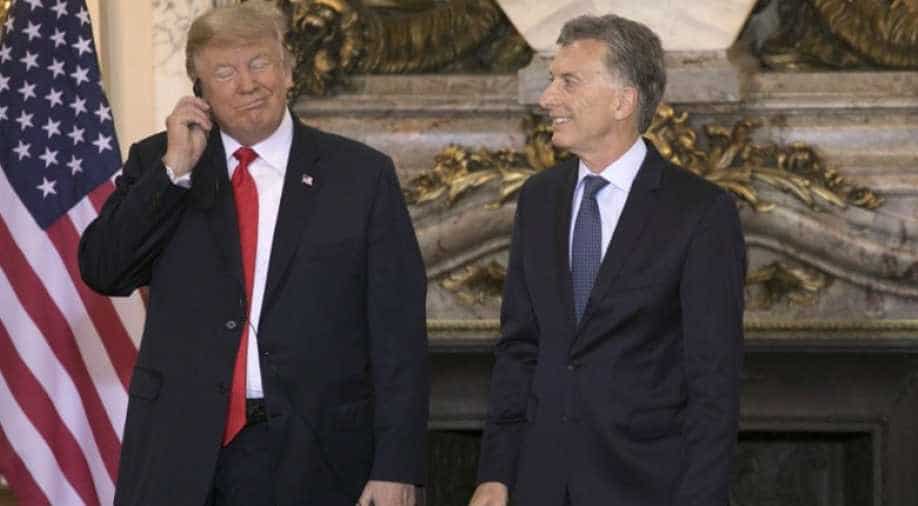 Just before leaving for the summit on Thursday, Trump in a tweet had said he won't be meeting President Putin

President Trump met Argentine President Mauricio Macri ahead of the G20 opening at Buenos Aires in Argentina on Friday.

The US president in a nostalgic mood, said: "People wouldn't know that he was a young man, very handsome man and we knew each other very well, and I actually did business with his family, with his father, great father, friend of mine, and I purchased the West Side Railroad Yards and it was a great job, a successful job."

"We're going to be talking about lots of good things for Argentina, for the United States, including trade, including military purchases and other things but we have a lot to talk about," the US president said as he promised to help the Argentinian economy which has been hit by an economic crisis.

"You're my friend long time, great family and you're doing a fantastic job," Trump said.

Just before leaving for the summit on Thursday, Trump in a tweet had said he won't be meeting President Putin due to the ongoing military standoff between Russia and Ukraine.

During the G20, Trump will be meeting several world leaders including PM Modi today. All eyes are on Trump's meeting with President Xi on Saturday as the two leaders are widely expected to address the escalating trade war between the two countries with experts speculating a likely breakthrough.

Although President Trump had indicated that he was looking forward to meeting Xi but did not assure a breakthrough. On Thursday, the president tweeted saying the US was making billions of dollars due to tariffs imposed on China.