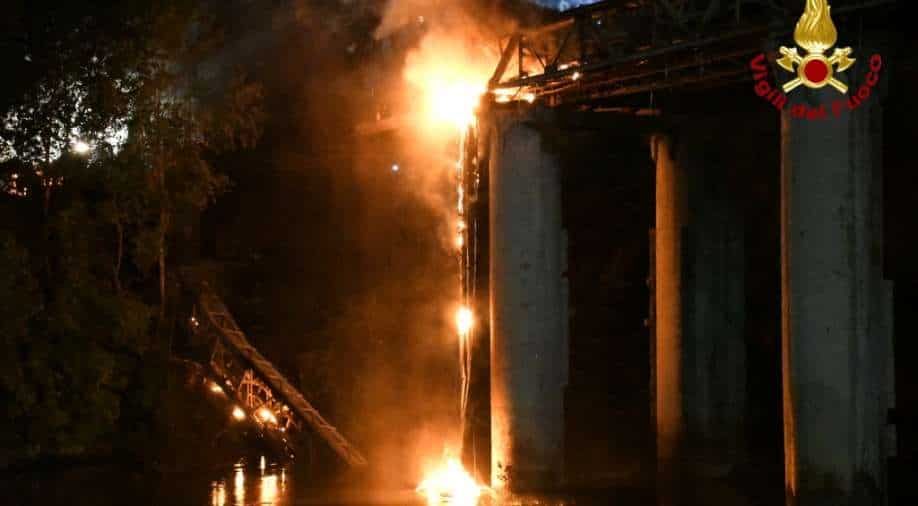 The bridge was opened in 1863 and is formally named as Ponte dell' Industria (Industry Bridge). It connects the densely populated Ostiense and Portuense neighbourhoods

A huge fire on Saturday night damaged Rome's famed "Iron Bridge," as parts of the 19th-century structure plunged into the River Tiber.

The bridge was opened in 1863 and is formally named as Ponte dell' Industria (Industry Bridge). It connects the densely populated Ostiense and Portuense neighbourhoods.

The tragic moment when Rome’s “Ponte di Ferro” or “iron bridge” broke apart in flames early this morning. Built in 1860s, it was iconic. Luckily no injuries. It’s thought gas canisters in shacks beneath could be to blame but could also be electric cables. pic.twitter.com/GWbMpvhznU

Romans call the 131-metre long bridge "Ponte di Ferro" (Iron Bridge), since most of Rome's other bridges are made of stone.

No injuries have been reported so far. However, the fire was evident as flames shot into the night sky.

As per media reports, it may have been started by a short circuit in shacks below the bridge. Firefighters said that the blaze, which was put out during the night, was fuelled by a damaged gas pipe.

Due to the fire, there was a power cut in surrounding areas.

The incident took place on the eve of elections for the next mayor, where the main issue has been the general decay of infrastructure and public services in the Italian capital.

India to host "Gen Next" leaders from 75 democratic countries