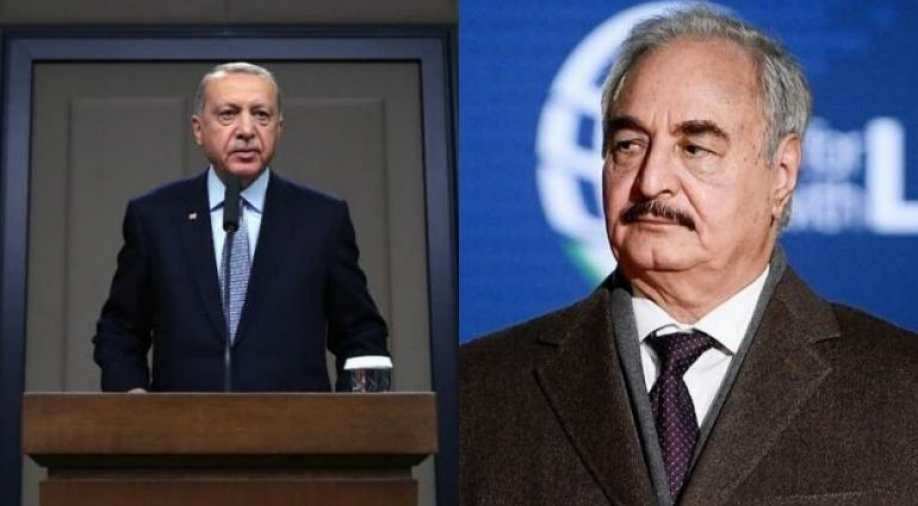 Erdogan says Haftar pursues Libya attacks "with all his resources"

Eastern military commander Khalifa Haftar is violating Libya's truce and so cannot be expected to respect the ceasefire called between his forces and pro-government troops, Turkish President Tayyip Erdogan said on Sunday.

Despite efforts by Turkey and Russia, Haftar abandoned talks on a ceasefire in Moscow earlier this month and his blockade of Libyan oilfields overshadowed a summit in Berlin last week aimed at shoring up a shaky truce. His Libyan National Army (LNA) aims to capture the capital, Tripoli, through the backing of Egypt, the United Arab Emirates, Russian mercenaries and African troops. Turkey meanwhile backs Fayez al-Serraj's internationally recognised Government of National Accord (GNA).

Speaking at Istanbul's Ataturk airport ahead of a visit to Algeria, Erdogan said Haftar's forces had repeatedly violated the ceasefire in Libya, adding that international support for the LNA was "spoiling" Haftar. 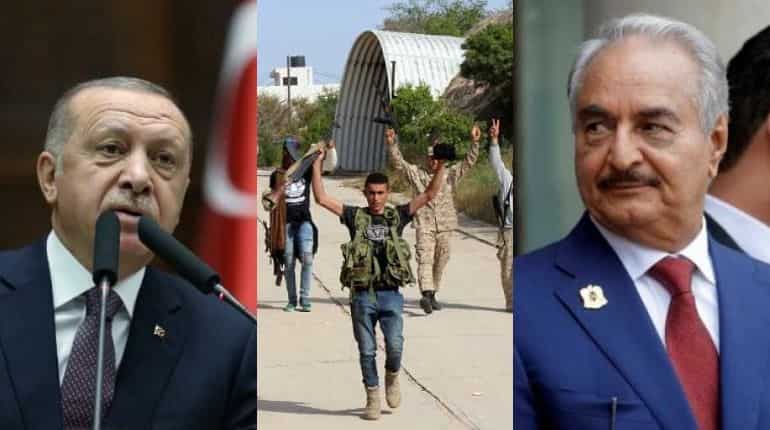 "First of all, Haftar is a putschist," Erdogan said. "At this point, we need to see clearly what Haftar's identity is. He is a man who has betrayed his superiors before as well. It is not possible to expect mercy and understanding from someone like this on the ceasefire," he added.
"He's continuing attacks with all his resources. However, he will not be successful here."

Turkey has repeatedly said Haftar must choose a political solution to the conflict and urged foreign powers to press the commander into a truce. It has also sent military advisers and trainers to help the GNA fend off Haftar's assault on Tripoli.

The translation reads thusly: 'We are not in pursuit of adventure in Syria, Libya, and the Mediterranean. Especially, we have no imperial ambitions. Our eyes are not blinded by the ambition of oil and money. Our only aim is to protect ourselves and our brothers' right, law and future.' Ankara has said that it will abide by a United Nations arms embargo on Libya as long as the ceasefire is maintained, but it warned that it could also deploy troops if necessary.

In Berlin, foreign powers agreed to form a special committee made up of five military officials from each side to monitor the truce. But Erdogan said on Sunday he did not expect a result from that committee due to Haftar's stance. Libya has had no stable central authority since the toppling of Muammar Gaddafi by NATO-backed rebels in 2011. It has had two rival governments, in the east and the west, for more than five years, with streets controlled by armed groups.

Foreign powers providing support to Haftar and the GNA has turned the conflict into a proxy war. More than 150,000 people have been displaced by the fighting for the capital. Several countries backing rival factions in Libya have violated an arms embargo which they had agreed to uphold a week ago at a summit in Berlin, the United Nations said on Saturday.