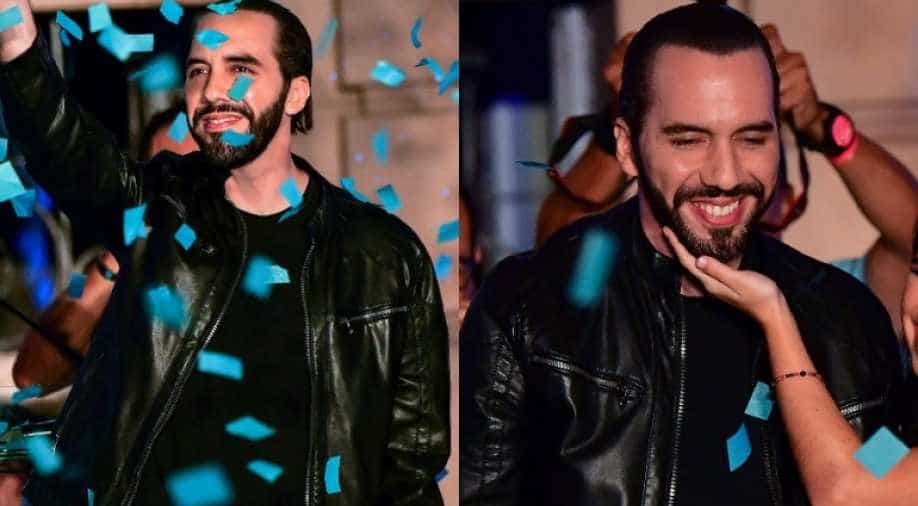 The country's Supreme Electoral Tribunal awarded him 53.78 per cent of the votes with 87.67 per cent counted — a lead it considered 'irreversible.'

Salvadorans on Sunday elected Nayib Bukele, the popular former mayor of San Salvador, as the Central American country's new president -- a result that ends the near 30-year grip on power of its two largest parties.

The country's Supreme Electoral Tribunal (TSE) awarded him 53.78 per cent of votes with 87.67 per cent counted -- a lead it considered "irreversible."

The 37-year-old president-elect, of the conservative Grand Alliance for National Unity (GANA) party, wore jeans and a leather jacket as he celebrated with supporters -- thousands chanting his name and waving flags in the capital's central Plaza Morazan.

"It's a victory for the Salvadoran people, today we won in the first round and we have made history," said Bukele, who despite being a firm favourite was expected to face a second round of voting.

He has promised to increase investment in education and fight corruption -- but his main task will be to confront insecurity in a country ravaged by gang violence.

He will also have to form an alliance with the rightwing opposition, which dominates Congress, and govern with them until at least 2021 when the next legislative elections are held.

Bukele's opponents -- Carlos Calleja of the right-wing Nationalist Republican Alliance (ARENA), and Hugo Martinez of the leftist Farabundo Marti Front for National Liberation (FMLN) -- quickly recognized the win. For nearly three decades, their parties have had a firm hold on Salvadoran politics.

"We recognize the results of these elections. We are going to call the president-elect to wish him luck in facing the challenges in this country," said Calleja, the runner-up with 31.62 per cent of votes. The FMLN's Martinez took third place with 13.77 per cent.

"We congratulate @nayibbukele for his historic victory in the first round. We celebrate his proposal for a new chapter for El Salvador. And we salute the political maturity of the contending candidates in accepting his victory," Almagro said.

Some 5.2 million people participated in the election, according to the elections authority chief Julio Olivo.

Voters formed long lines outside polling stations in parts of San Salvador, where gang violence and insecurity are endemic. El Salvador is among the world's most violent countries with a murder rate of 51 per 100,000 citizens.

"It's honestly scary to go out alone in the street, you never know what can happen you," first-time voter Gabriela Solorzano, 19, said at a polling station in the gang stronghold of Mejicanos in the capital's north, her brother holding her hand.

In nearby streets, where graffiti on the walls testify to the presence of criminal gangs, many voters arrived aboard buses laid on by the political parties.

Some 23,000 police officers and 15,000 soldiers were deployed to protect the sixth presidential election since democracy was restored in 1992 -- after 12 years of bloody civil war between state security forces and leftist guerrillas.

For analyst Roberto Canas, Salvadorans "buried" the bipartisanship that "could not read the needs of the people, such as the insecurity experienced daily on the streets."

Confronting insecurity will certainly be a key challenge for Bukele, who Canas said: "personified the population's tiredness."

According to authorities, gang violence was the source of most of last year's 3,340 reported murders -- and gangs are said to have 70,000 members, with 17,000 behind bars.

"The new president must offer daring security solutions," Carlos Carcach, an analyst and professor at the Higher School of Economy and Business in El Salvador, told AFP.

In the past, rightwing governments opted for repression or secret negotiations with gangs. Meanwhile, under the FMLN's Mauricio Funes (2009- 2014), there was a truce between the country's two main gangs which temporarily reduced homicides.

Another task will be to reduce illegal immigration to the United States -- as President Donald Trump has threatened to cut off aid if the flow of Central American migrants is not stemmed.

During the last few months of 2018, more than 3,000 Salvadorans joined caravans marching towards the United States, fleeing gangs and a lack of jobs.

The other main worry for Salvadorans is the economy. Although it grew by 2.6 per cent in 2018, its biggest rise in five years, that is considered insufficient to cover the demand for new employment.

Bukele will have to juggle the need to raise taxes to cover an external debt of more than $9.5 billion while trying to maintain social programs in a country where the minimum wage of $300 a month is barely enough to buy food.

Just over 30 per cent of El Salvador's 6.6 million inhabitants live below the poverty line.