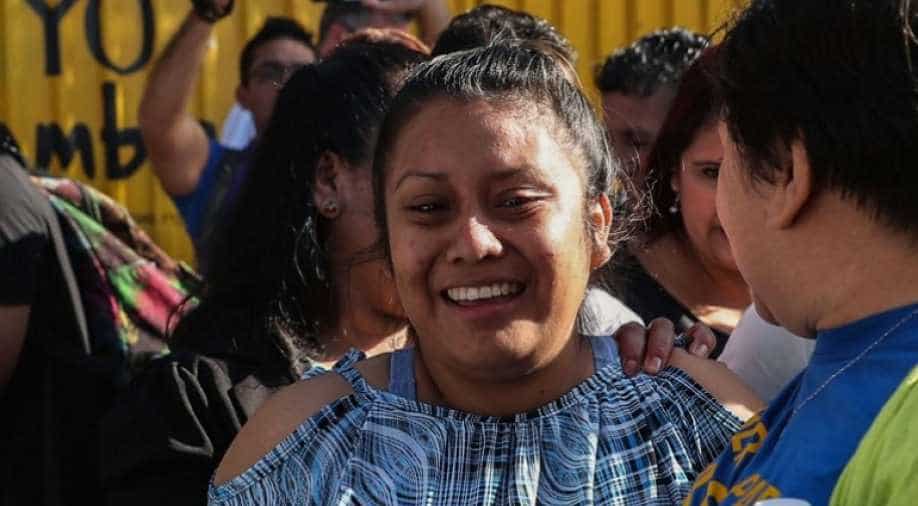 Evelyn Hernandez (C) is surrounded by activists after being released from the women's Readaptation Centre. Photograph:( AFP )

After serving 33 months for aggravated homicide, 20-year-old Hernandez smiled as she was reunited with her parents and a brother in the capital San Salvador.

A Salvadoran court on Friday freed , who was sentenced to 30 years in prison after she gave birth to a stillborn baby at home.

After serving 33 months for aggravated homicide, 20-year-old Hernandez smiled as she was reunited with her parents and a brother in the capital San Salvador.

The court in Cojutepeque, east of the capital, ruled that she will be retried but while living at home. A hearing has been set for April 4, with a new judge, her lawyer Angelica Rivas said.

El Salvador has an extremely strict abortion ban. Hernandez gave birth in the makeshift bathroom of her home in the central Cuscatlan region. She was 18 years old and eight months pregnant.

She said her son was stillborn but was convicted of murdering him, abortion rights group ACDATEE said.

ACDATEE cited a pathologist's report which it said indicated the baby had choked to death while still in the womb.

Prosecutors argued Hernandez was culpable for not having sought prenatal care, ACDATEE said.

The group said Hernandez had not known she was pregnant and gave birth on the toilet after feeling abdominal pains. She got pregnant as the result of a rape, which she did not report out of fear because her family had been threatened.

Even women who abort due to birth defects or health complications risk jail sentences of up to 40 years in El Salvador. Campaigners say some have been jailed after suffering miscarriages.

The country's abortion law made international headlines in 2013 when a sick woman was forbidden from aborting a fetus which developed without a brain.

Under a ruling by the Inter-American Court of Human Rights, the Salvadoran state eventually authorized her to undergo a cesarean section. The baby died shortly after the procedure.