Colombia ups deployment of security forces to Cali amid violence 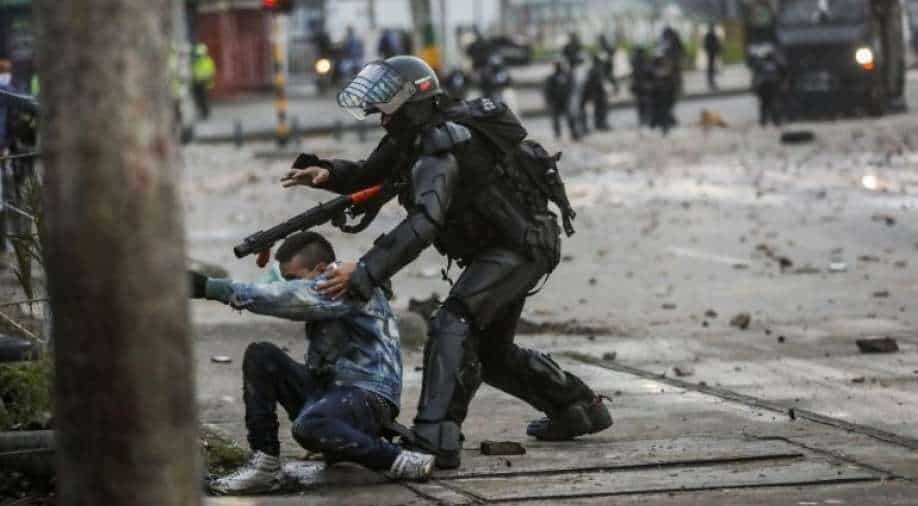 A security personnel grabs a man during a protest against the tax reform of President Ivan Duque's government in Bogota, Colombia on Friday. Photograph:( Reuters )

Unions called strikes on Wednesday in Colombia's main cities to demand the government of President Ivan Duque withdraw the reform, which it presented to Congress earlier this month as it tries to increase tax income

Colombia has deployed more police and army units to Cali, its third-biggest city, in a bid to end disturbances and vandalism amid protests against a controversial tax reform, the defense minister said on Friday.

Unions called strikes on Wednesday in Colombia's main cities to demand the government of President Ivan Duque withdraw the reform, which it presented to congress earlier this month as it tries to increase tax income.

The most serious riots and vandalism took place on Wednesday and Thursday in Cali, capital of Colombia's Valle del Cauca province, with banks and government offices attacked, among other incidents.

One man died on Wednesday following confrontations between protesters and the police, while 55 civilians and more than 40 police officers were injured in the last two days, according to local authorities.

"We have discovered that the violent events in Cali were premeditated, planned and sponsored by criminal organisations. We are taking more men and women from the police and the army to guarantee the defence and security of citizens," Defence Minister Diego Molano told reporters at a briefing.

An additional 2,500 members of security forces will be deployed in Cali, he added.

Cali Mayor Jorge Ivan Ospina estimated that losses due to looting and vandalism amounted to around 80,000,000,000 pesos.

The national protests began despite a court order and pleas from authorities to suspend marches due to fears of contagion while Colombia remains gripped in a third wave of coronavirus infections, which has stretched healthcare to breaking point.

The government said it is willing to modify the tax reform bill via debates in Congress. A majority of political parties, in addition to unions and business associations, reject the proposal.