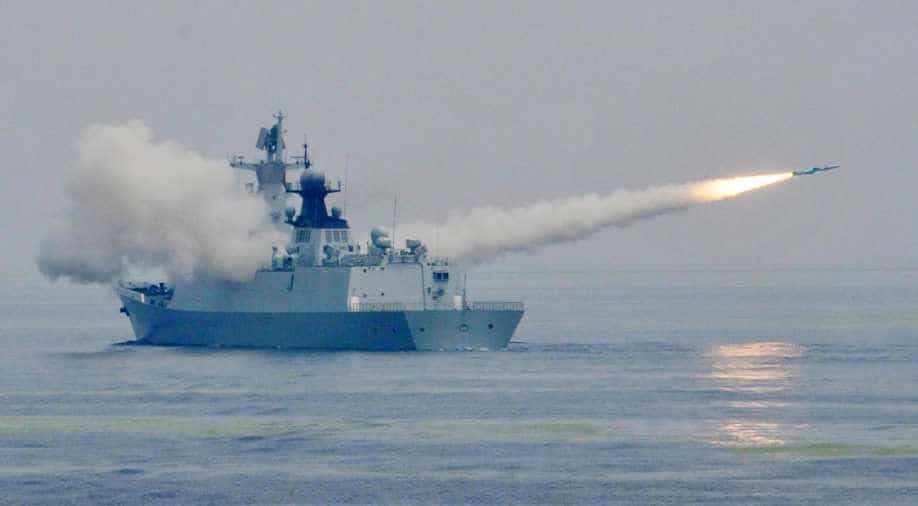 An air defence identification zone over the sea would give the Chinese military authority over foreign aircraft.? Photograph:( Getty )

Follow Us
China warned rivals on Wednesday against turning the South China Sea into a "cradle of war" and threatened an air defence zone there, after its claims to the strategically vital waters were declared invalid.

The surprisingly strong and sweeping ruling by a UN-backed tribunal in The Hague provided powerful diplomatic ammunition to the Philippines, which filed the challenge, and other claimants in their decades-long disputes with China over the resource-rich waters.

China reacted furiously to Tuesday's decision, insisting it had historical rights over the sea while launching a volley of thinly veiled warnings at the United States and other critical nations.

"Do not turn the South China Sea into a cradle of war," vice foreign minister Liu Zhenmin told reporters in Beijing, as he described the ruling as waste paper.

Liu also said China had "the right" to establish an air defence identification zone over the sea, which would give the Chinese military authority over foreign aircraft.

A similar zone set up in 2013 in the East China Sea riled Japan, the United States and its allies.

"Whether we need to set up one in the South China Sea depends on the level of threat we receive," he said.

"We hope other countries will not take the chance to blackmail China."

The Chinese ambassador to the United States, Cui Tiankai, was even more blunt.

"It will certainly intensify conflicts and even confrontation," Cui said in Washington on Tuesday.

And the ruling Communist Party's mouthpiece, the People's Daily, said on Wednesday that China was prepared to take "all measures necessary" to protect its interests.

China justifies its sovereignty claims by saying it was the first to have discovered, named, and exploited the sea, and outlines its claims for most of the waterway using a vague map made up of nine dashes that emerged in the 1940's.

Those claims overlap with those of the Philippines, Vietnam, Malaysia, Brunei, and Taiwan.

Manila, under previous president Benigno Aquino, launched the legal case in 2013 after China took control of Scarborough Shoal, a rich fishing ground within the Philippines' exclusive economic zone and far away from the nearest major Chinese landmass.

China has also in recent years built giant artificial islands capable of hosting military installations and airstrips in the Spratlys archipelago, one of the biggest groups of features in the sea.

Aside from stating that China's historical rights were without "legal basis", the tribunal ruled that its artificial island building and the blocking of Filipino fishermen at Scarborough Shoal were unlawful.The Philippines, under new President Rodrigo Duterte, declined to celebrate the verdict.

"We have to be magnanimous in victory," Foreign Secretary Perfecto Yasay told reporters in Manila on Wednesday.

"In very delicate matters like this, you cannot be provocative in statements. We urge everybody including China to exercise restraint and sobriety."

Duterte has repeatedly said he wants to improve relations with China, which plummeted under Aquino because of the dispute, and that he would seek Chinese investment for major infrastructure projects such as a railway for the impoverished southern Philippines.

He is open to direct talks with China aimed at achieving a long-awaited code of conduct among rival claimants for the sea. China has long wanted to negotiate directly, and analysts said dialogue rather than conflict was the most likely scenario.

Yet a military build-up in the sea continued.

China launched naval drills in the northern areas before the verdict, while the US Pacific Command said it had deployed an aircraft carrier for flights to support "security" in the sea.

Taiwan, which was another loser in the verdict as its claims are very similar to those of China, sent a warship on Wednesday to the sea to protect its claims.

Indonesia also announced it would sharply strengthen security around its islands in the sea, where there have been clashes with Chinese vessels recently.

China used deadly force to seize control of the Paracel Islands from South Vietnam in 1974, and Johnson Reef from a united Vietnam in 1988.

China faced immediate pressure to abide by the ruling from Western powers, which insist they have legitimate interests in the dispute because of the need to maintain "freedom of navigation" in waters that host more than $5 trillion in shipping trade annually.

The United States emphasised that China, as a signatory to the United Nations Convention on the Law of the Sea, should accept the verdict.

"As provided in the convention, the tribunal's decision is final and legally binding on both China and the Philippines," State Department spokesman John Kirby told reporters in Washington.

Australian foreign minister Julie Bishop warned China there would be "strong reputational costs" for ignoring the ruling, as she called for Chinese island building to end.