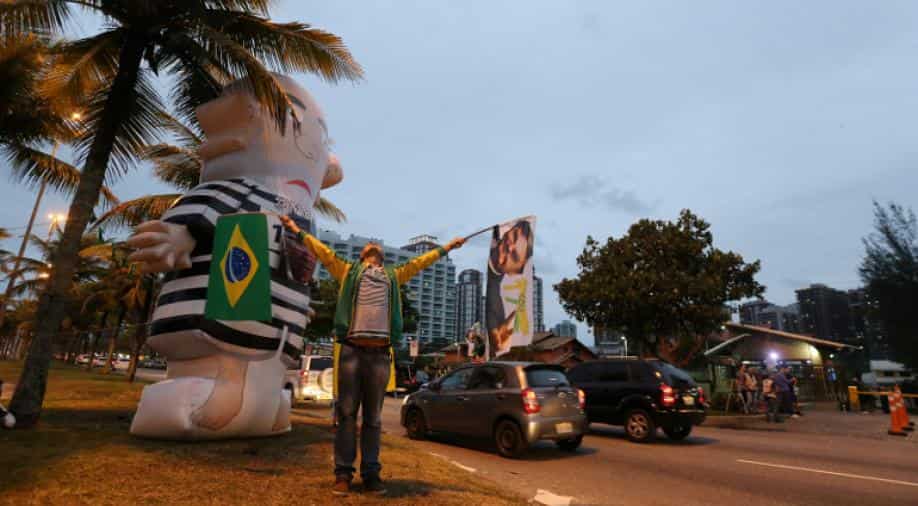 Former center-left candidate Ciro Gomes said in a video on social media that he would not take sides in the election campaign, withholding support for Haddad of the Workers Party (PT).

The chances of Brazil's leftist presidential candidate Fernando Haddad narrowing the lead of right-wing front-runner Jair Bolsonaro took a hit when he failed to win a crucial endorsement on Saturday, a day before the two face off in a runoff election.

Former center-left candidate Ciro Gomes said in a video on social media that he would not take sides in the election campaign, withholding support for Haddad of the Workers Party (PT).

Gomes, a former governor of Ceará state in the northeast, is influential in Brazil's poorest region. His endorsement could have given Haddad a big lift in the South American country's most polarized election in a generation.

But Rodrigo Janot, Brazil's influential former prosecutor general under whose watch the country's unprecedented investigations and prosecutions of endemic political graft took place, tweeted late Saturday that he would vote for Haddad. That was a blow to Bolsonaro's work positioning himself as the only anti-corruption candidate.

"I think we are at the brink of a process that could push our democracy beyond its limits," Janot told Reuters late Saturday. "Freedom, equality and fraternity - always and at any cost."

As only two candidates remain and those figures discard voters who say they will annul their votes, that in practice means Haddad needs to win 5 percentage points to overtake the right-winger.

In a Datafolha poll also released late Saturday, Bolsonaro had 55 percent of voter backing, compared with 45 percent for Haddad.

While Haddad failed to get Gomes to endorse him, he won the backing on Saturday not just of Janot but of Brazil's most popular YouTube host, Felipe Neto, who has 27.7 million followers on his channel. A popular anti-corruption judge, Joaquim Barbosa, who jailed several top PT leaders for corruption, also came out for Haddad.

Gomes finished third in the Oct. 7 first round vote with 12 percent of the vote, behind Bolsonaro's 46 percent and Haddad's 29 percent. Gomes had hoped to be the standard bearer of the left but was outmaneuvered by jailed PT leader Luiz Inacio Lula da Silva, who is serving a 12-year prison sentence for corruption and anointed Haddad as his stand-in. [nL2N1WI0J7]

Bolsonaro, a former Army captain, is poised to become Brazil's first far-right president since the end of the 1964-1985 military dictatorship. The 63-year-old seven-term congressman has promised to crack down on crime and corruption, pitching himself as the anti-establishment candidate for voters fed up with political graft and violent crime.

Bolsonaro's sudden rise comes as Brazil finds itself in its worst recession and embroiled in its biggest corruption scandal after the leftist PT ran the government for 13 of the last 15 years.

Until his presidential run, Bolsonaro was best known for defending the former military regime and its use of torture. He has faced charges for misogynist, racist and homophobic rants.

The Supreme Court rejected the racism charge, but has not ruled on a charge of inciting to rape in a case in which he told a fellow lawmaker she was not pretty enough to rape. He called the case political persecution.

A week ago, Bolsonaro vowed to run all the "red" leftists out of Brazil or put them in jail, harsh words that probably contributed to the narrowing of his lead.

YouTuber Neto said he had been neutral until that point. "Everything changed when (Bolsonaro) said he will sweep opponents out of the country or into jail. In 16 years of PT I have been robbed, but never threatened," Neto said by Twitter.

In the final two days of campaigning, Bolsonaro has sounded more moderate in his statements, backing down on a plan to follow U.S. President Donald Trump's example and pull Brazil out of the Paris climate change accord.

On Friday he told Xingú tribes people they had a right to charge royalties for mining and hydro electric power generation on their reservations, a proposal welcomed by some natives but rejected by anthropologists and environmentalists who see the tribes as the last guardians of the Amazon rainforest and its biodiversity.

"You are as Brazilian as any of us," he said in a video posted on social media. "I want you to have the right to use your land and exploit its biodiversity and mineral riches."

In his final hours of campaigning in Sao Paulo, Haddad accused the Bolsonaro camp of "sweetening" their candidate to make him appear what he is not. "He is a truculent and dangerous person, and that's how he should be presented to the nation," he said.