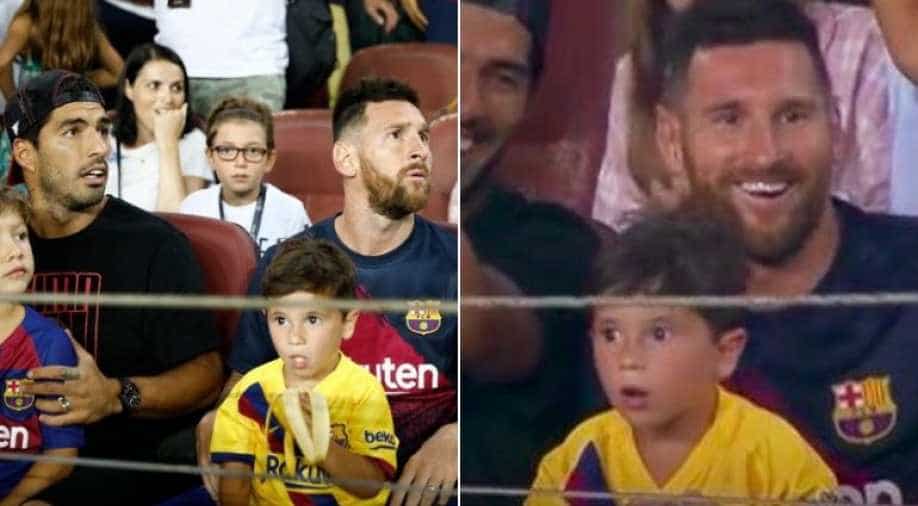 Lionel Messi's son Mateo was spotted on the camera celebrating a goal netted by an opponent player during Barcelona vs Real Betis clash on Sunday.

The video, which questioned Messi Junior's allegiances (in a funny way), went viral on the social forums.

Messi, who was left out of the squad for Barca's first home game against Betis due to a calf injury, watched the clash from the stands with his elder son Thiago and Mateo. His teammate Luis Suarez, who is nursing a calf injury, was also there with his son.

Before being corrected by Suarez, Mateo frivolously celebrated after Nabil Fekir scored the opener for Betis.

Suarez and Messi laughed on the situation but later on reminded Mateo of his loyalty.

Messi had earlier mentioned that how the three-year-old taunts him when he loses.

"Mateo likes all the shirts and he puts them on, but last time on the Playstation he said, 'I'm being Liverpool, the ones who beat you. I'm Liverpool and you're Barcelona'," Messi had told earlier.

"He understands a little but doesn't realise it yet."

"Just like when we lost to Valencia, [he said] 'Valencia won, ehhh'. Or we watch TV and he cheers Real Madrid's goals," Messi added.

Well, despite getting visible support from Messi's kid, Real Betis end up losing the match.

In the absence of Lionel Messi, Luis Suarez and Ousmane Dembele, Barcelona's new signing Antoine Griezmann scored twice on his Camp Nou debut, to earn a 5-2 victory for the Spanish champions.