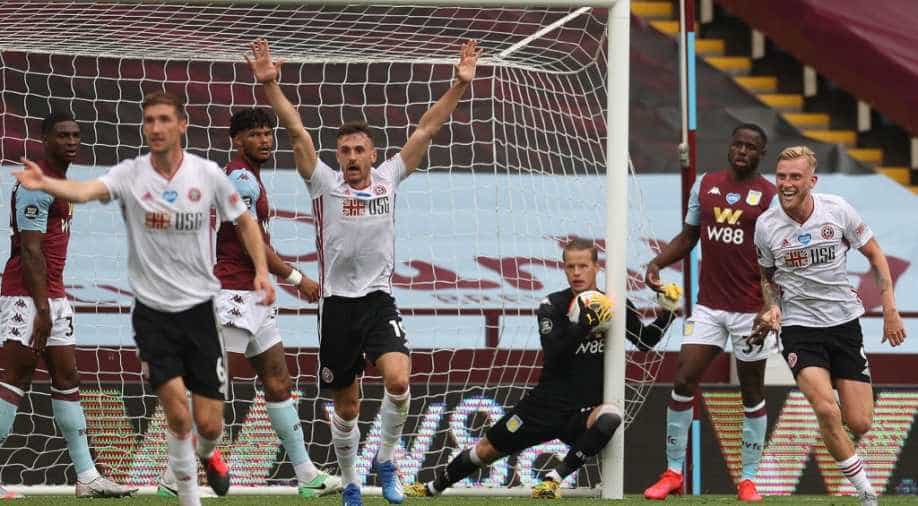 Fans, pundits and even the players were left baffled after a Sheffield United goal was not given despite the ball clearly crossing the line after Aston Villa goalkeeper Orjan Nyland flapped at a deadly inswinging left-wing cross from Ollie Norwood before taking the ball over the goal-line. https://www.wionews.com/topics/premier-league

After three long months, Premier League finally resumed the 2019-20 season with Aston Villa and Sheffield United locking horns. While the match ended in a goalless draw, a massive error stole the limelight from the much-awaited resumption.

Fans, pundits and even the players were left baffled after a Sheffield United goal was not given despite the ball clearly crossing the line after Aston Villa goalkeeper Orjan Nyland flapped at a deadly inswinging left-wing cross from Ollie Norwood before taking the ball over the goal-line.

Usually, whenever a ball crosses the goal-line, the match referee receives a signal on his watch. However, on Wednesday, referee Michael Oliver didn’t receive anything and allowed the game to continue. Even Video Assistant Referee (VAR) didn’t intervene as the onus was on the goal-line technology to resolve the issue. It was an unprecedented moment and the year 2020 couldn’t have surprised us more.

Where is both VAR and Goal-line technology when you need it?

A point in the end on the PL return.

All of the highlights from a contentious draw at Villa Park

Bosses from goal-line technology providers HawkEye issued an apology after the system failed to pick up the clear goal with fans and pundits terming the incident as a major howler.

'During the first half of Aston Villa v Sheffield United match at Villa Park, there was a goalline incident where the ball was carried over the line by Aston Villa goalkeeper, No. 25 Nyland,' the statement read.

'The match officials did not receive a signal to the watch nor earpiece as per the Goal Decision System (GDS) protocol.

The seven cameras located in the stands around the goal area were significantly occluded by the goalkeeper, defender, and goalpost.

'This level of occlusion has never been seen before in over 9,000 matches that the Hawk-Eye Goal Line Technology system has been in operation.

'The system was tested and proved functional prior to the start of the match in accordance with the IFAB Laws of The Game and confirmed as working by the match officials.

'The system has remained functional throughout. HawkEye unreservedly apologises to the Premier League, Sheffield United, and everyone affected by this incident.'

The incident becomes more crucial as Sheffield United are battling for a European championship spot in what has been a tight battle from the Blades against some of the big clubs of English football. Two more points could turn out to be massive when the season ends.

“What’s VAR for? Surely they can look at that and say it’s a goal, it’s like someone is scared to make a decision”

“I think he was in the Holte End when he caught it” - Chris Wilder. 💬

“We couldn’t understand why it wasn’t given” - Enda Stevens.pic.twitter.com/p6WtD5rsgR

A report stated that the technology was working throughout the game and that Oliver’s watch indicated ‘goal’ during half-time when substitutes were warming up by shooting the ball into the net.

However, Sheffield boss Chris Wilder insisted it was clear the ball was over and said VAR should have come to the rescue.

"I don't know whether to laugh or cry. Already the jokes have started. It's all going to come out but we're pretty disappointed and we've got to get on with it.

“Both sets of players, both sets of staff had that feeling that was a goal.

You have to, like i’m trying to, take it on the chin.”

The gaffer gives his thoughts on tonight’s decision 👊 pic.twitter.com/tsyo3Qqe9W

"I believe a decision should have been made from Stockley Park (the VAR centre). For someone to tell me with seven cameras and this is the first time it's happened in over 9,000 games it's a difficult one to take.

"We believe it should have been referred (to VAR)."