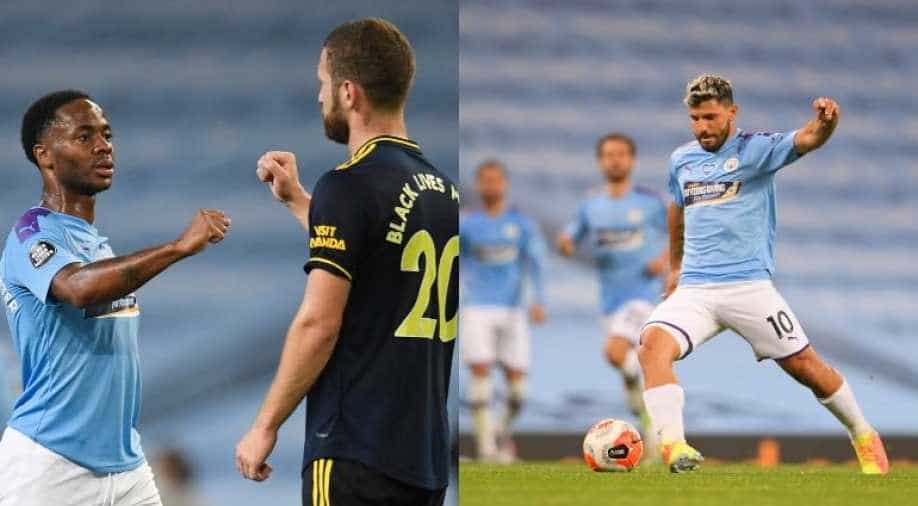 City's Raheem Sterling shined as the team returned to action after being on halt for three months due to coronavirus pandemic.

Manchester City has resumed their Premier League campaign on a positive note after beating Arsenal 3-0 behind closed doors in the Etihad Stadium on Wednesday.

City's Raheem Sterling shined as the team returned to action after being on halt for three months due to coronavirus pandemic.

Manchester City's win over Arsenal has cut short Liverpool's celebrations as Jurgen Klopp's side cannot lift the trophy on Sunday at Everton in the Merseyside derby.

The English Premier League restarted after a 100-day break due to the coronavirus pandemic as Manchester City and Arsenal players took a knee in solidarity with Black Lives Matter protests sweeping the world after George Floyd's killing in Minneapolis by a police officer.

A minute's silence was also observed for those who lost their lives due to the COVID-19 pandemic including Pep Guardiola's mother who passed away recently.

The goal came after Arsenal substitute David Luiz failed to deal with a ball into the box and allowed Sterling in on goal, and the Brazilian was at fault again for City's second.

His challenge saw him a red and gave a penalty Manchester City. Kevin De Bruyne took the penalty and scored.

David Luiz has taken the blame for the team's loss. "It's not the team's fault, it was my fault," he said. "Today I think the team did well, especially with 10 men, the coach is amazing, the players did amazing, it's just my fault.

"I decided to play, I should have taken another decision in the last two months, but I didn't. It was all about my contract, whether I stay or not. I have 14 days to be here, and that's it. Today was my fault."

Luiz produced a catalogue of errors in a torrid 25-minute cameo appearance as 10-man Arsenal suffered a heavy loss at City on the Premier League's return.

Guardiola's side wrapped up the win in stoppage time when Sergio Aguero hit the post, after a neat exchange with Sterling, and substitute Phil Foden slotted home the loose ball.