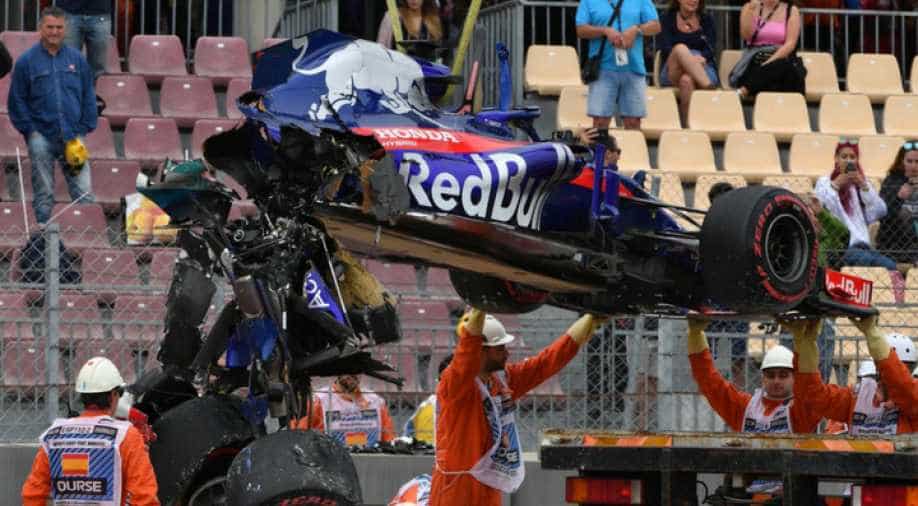 Brendon Hartley’s Toro Rosso STR13 is recovered in pieces after crashing in FP3 Photograph:(Twitter)
Follow Us

New Zealander Brendon Hartley lost control of his Toro Rosso car at Turn Nine and smashed into the barriers during Practice Three for Spanish Grand Prix.

Brendon Hartley was trying to gain maximum speed into Turn Nine but edged onto the dirt and crashed, destroying the rear-end of his car.

Both rear wheels and the rear of the gearbox were left hanging by their tethers, but Hartley was unhurt and responded "I'm OK" on the team's radio link.

Hartley was assisted by medical staff as he walked away from his wrecked car.

Watch the video of the crash:

The speed with which the Toro Rosso hit the wall in Campsa, is astonishing. I'm glad Brendon Hartley got out unscathed. #SpanishGP pic.twitter.com/l4h7ffOwIG

Will @BrendonHartley's car be ready for qualifying after this big shunt in FP3?#SpanishGP ?? #F1 pic.twitter.com/ZEGViMxJjS

Meanwhile, Lewis Hamilton topped the times ahead of his Mercedes team-mate Valtteri Bottas in the third and final free practice for the Spanish Grand Prix.

The magnitude of the crash indicates that Hartley won't be able to take part because the engineers will surely struggle and need a lot of time to rebuild the damaged car in time for qualifying which means Pierre Gasly is set to be the only Toro Rosso representative out on track for the qualifying session.

The extent of the damage to his car was evident as the recovery crane removed it from the gravel, with the engine and gearbox falling off the back.