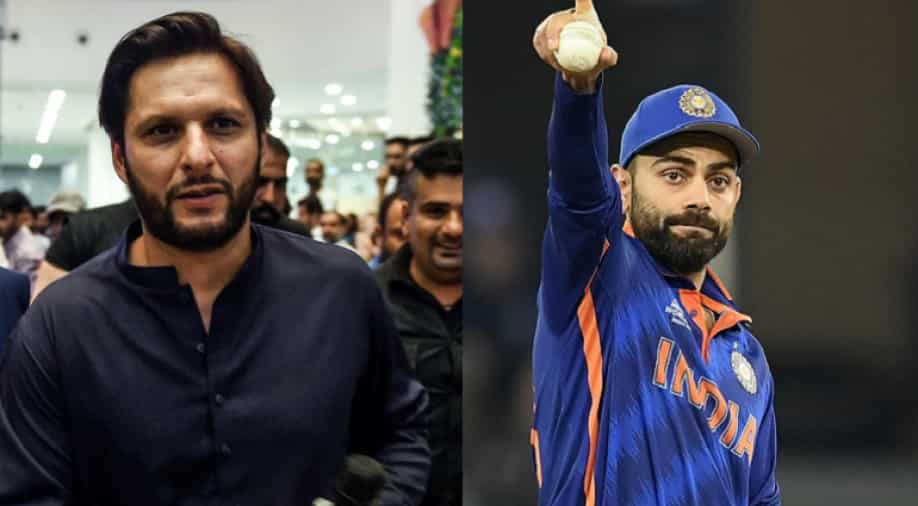 Former Pakistan captain Shahid Afridi has urged Virat Kohli to step down from captaincy across all formats for Team India and enjoy his batting without any pressure.

Former Pakistan captain Shahid Afridi believes Virat Kohli should step down from captaincy across formats and enjoy his batting for Team India going forward. Kohli has already stepped down as the T20I captain of the Indian team post the conclusion of their campaign in the ongoing T20 World Cup 2021. Kohli had announced that he will be leaving captaincy in the shortest format even before the start of the T20 World Cup in UAE this year.

Rohit Sharma has been appointed as Kohli's successor in T20Is and will be leading Team India in the upcoming T20I series against New Zealand at home. While he has already left the T20I captaincy, questions have been raised on Kohli continuing as captain in ODIs. Recent reports have also stated that BCCI is planning to ask Kohli to step down as ODI captain as well with Rohit being the frontrunner for the top post.

Former Pakistan skipper Sahid Afridi has come up with a piece of bold advice for Kohli and has urged him to relinquish captaincy from ODIs and Tests as well. Afridi believes Kohli is one of the best batters in the world and should enjoy his game without the burden of captaining the side.

"I think he has been a wonderful force for Indian cricket but I think it would be best if he decided to retire as captain in all formats now," Afridi said on Samaa TV.

Afridi, who had shared the dressing room with Rohit during his stint with the Deccan Chargers in the Indian Premier League (IPL), believes Rohit has the ability to stay calm under pressure and can also be aggressive as per the situation. He backed Rohit to succeed as captain of the Indian team and said the change was bound to happen.

"As far as Rohit is concerned, this was on the cards. I have played with him for a year (at Deccan Chargers). He is an outstanding player with terrific shot selection. He stays relaxed where required and shows anger when needed to as well. We will see both sides. Like I said, this captaincy move was bound to happen. He should definitely be given a chance," said Afridi.

Also Read: BCCI wants Kohli to focus on batting, likely to replace him with Rohit as ODI captain - Report

"I think Virat should step down as captain and just enjoy his remaining cricket which I think is aplenty. He is a top batsman and he can play freely without any other pressures on his mind. He will enjoy his cricket," Afridi further elaborated on Kohli's future as India's captain.

As per reports, BCCI might ask Kohli to step down as ODI captain ahead of the team's tour of South Africa next year. However, it remains to be seen if India will continue with split captaincy in limited-overs cricket or will Rohit take charge in both ODIs and T20Is.