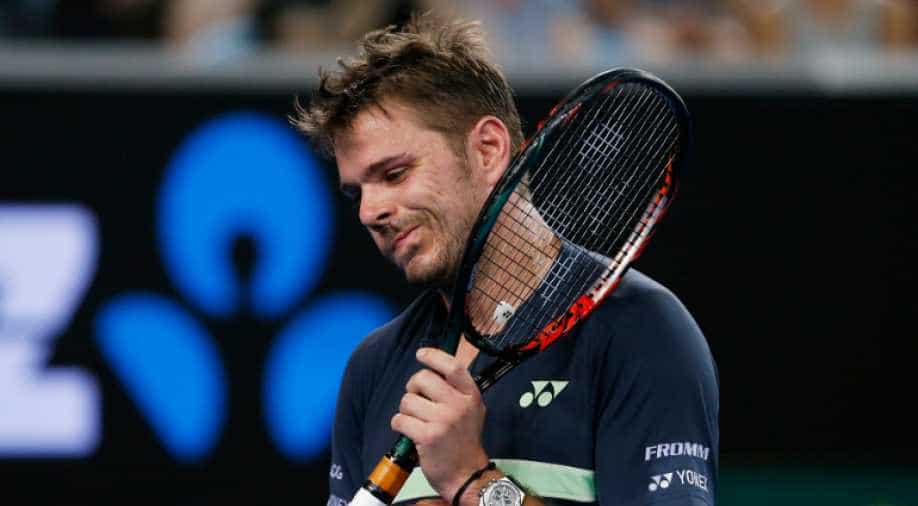 'Today was extremely tough to feel that way on the court, to lose that way, even if he was playing well,' Wawrinka said. Photograph:( Reuters )

Struggling Swiss former winner Stan Wawrinka's Australian Open campaign is over after a convincing second round defeat by American Tennys Sandgren on Thursday.

It has been tough so far this year for Wawrinka, who was playing in his first tournament since Wimbledon six months ago following left knee surgery.

"Today was extremely tough to feel that way on the court, to lose that way, even if he was playing well," Wawrinka said.

"When you have won three Grand Slams, you don't feel great on the court like today. But I need to be still positive. I think the last 12 days was more than what I could have dreamed for coming here."

Also read: Federer struts his stuff, then knuckles down to beat Germany's Struff

"I really came without thinking I will be able to play the first match. That's a big step for me."

"I only had surgery five months and three days ago and to be that far already, it's more than what we could have expected with my team."

He was never in the contest and had his serve broken five times and made only 21 winners and 35 unforced errors.

The three-time Grand Slam winner, who defeated Rafael Nadal to win the 2014 Australian Open, has slipped to nine in the world rankings and faces a battle to climb higher after his early round exit.

He made the semi-finals at last year's Australian Open where he lost to eventual champion Roger Federer in five sets.

Wawrinka had a troubled lead-in to the year's opening Grand Slam, pulling out of an exhibition event in Abu Dhabi on his way to Australia.

He had not played a competitive match prior to his first round Open win over Lithuania's Ricardas Berankis, having only decided to take part last weekend.

"My plan is to leave here and go back to practice, especially fitness-wise at the beginning," Wawrinka said of his future plans.

"I know I have a lot of work to do. I need to be really patient. It's going to be tough. But I'm ready for it."

He said his next tournaments would be Marseille and Rotterdam.

"This would definitely be (the biggest match)," Sandgren said of his win over Wawrinka.

"All the categories: biggest win, biggest moment of getting a victory, setting me up for the biggest stage to play third round of a Slam, biggest opportunity. All those good things."