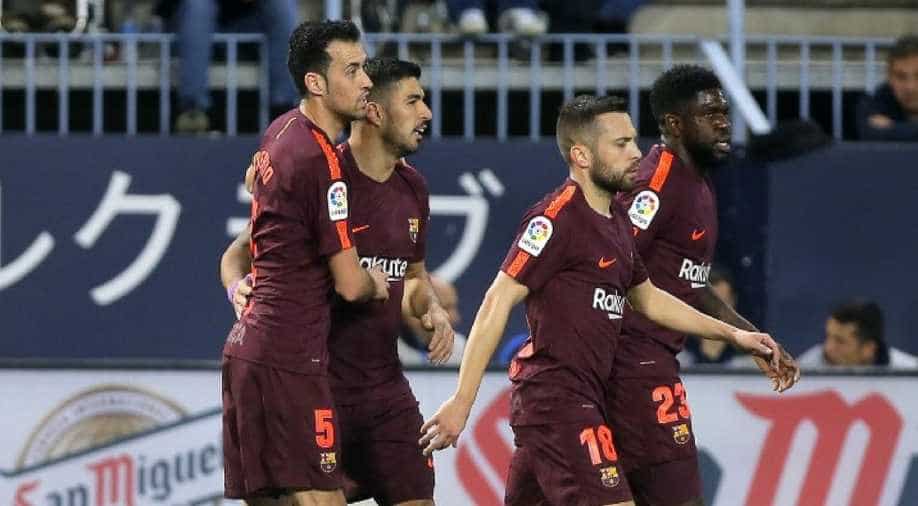 Lionel Messi was away attending the birth of his son but Barcelona still had more than enough to beat 10-man Malaga 2-0 on Saturday and move 11 points clear at the top of La Liga.

Messi was watching the game on a television in the hospital as Luis Suarez and Philippe Coutinho put his team two up inside half an hour at La Rosaleda Stadium, before Samuel Garcia was sent off in the 30th minute for a dangerous tackle on Jordi Alba.

Down a man and without a win in 12 matches, Malaga might have feared a rout but Barca settled for a straightforward victory, perhaps with one eye on Wednesday's Champions League last-16 clash against Chelsea.

Messi is expected back at the Camp Nou, where the score is 1-1 from the first leg, but Ernesto Valverde will have been delighted with how his attackers filled the void, as Suarez, Coutinho and Ousmane Dembele all delivered excellent displays.

In particular, Dembele's brilliant turn and the pass was bettered only by Coutinho's flicked finish for what was a superb second goal.

The win means Barca extend their advantage over second-placed Atletico Madrid, who can pull the deficit back to eight points with a win over Celta Vigo on Sunday.

Malaga, meanwhile, remains rooted to the bottom of the table.