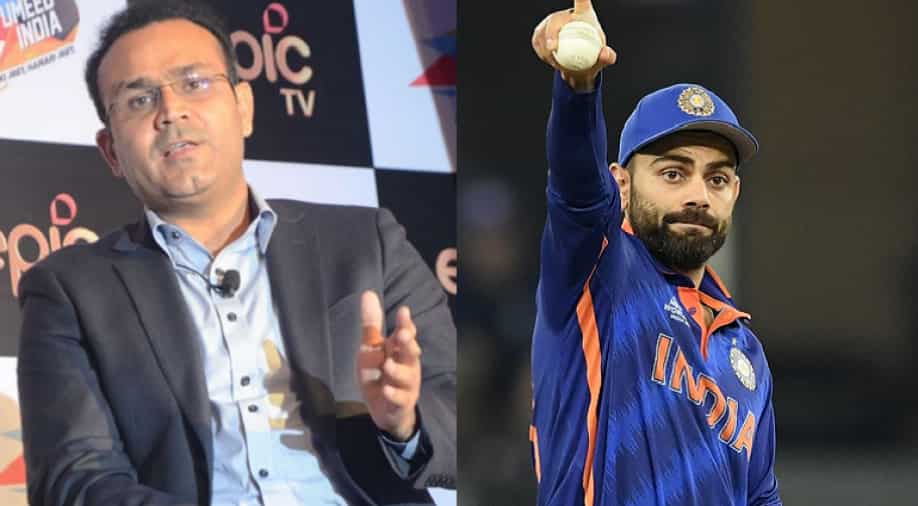 Sehwag responded to a fan who asked if Kohli should leave ODI and Test captaincy. | Photo - IANS/AFP | Photograph:( Others )

Former India opener Virender Sehwag was recently asked by a fan if Virat Kohli should step down as the captain of the Indian team in ODIs and Tests as well. Here's what he had to say.

Indian skipper Virat Kohli's leadership is once again under the scanner after his team's poor show in the ongoing T20 World Cup 2021. India have bowed out of the showpiece event after suffering two consecutive defeats in their first four matches and will be heading home after playing their final Super 12 game against Namibia on Monday (November 08).

Kohli had already announced that he will be stepping down as the captain of the Indian T20I side post the conclusion of the ongoing T20 World Cup 2021. However, many have now raised questions over his captaincy credentials in ODIs. Reports have stated that BCCI might look to replace him in the fifty-over format as well.

Former India opener Virender Sehwag was recently asked by a fan if Kohli should also leave ODI and Test captaincy of the Indian team. Sehwag backed the current Indian skipper to continue leading in the other two formats while carrying on as a pure batter in the shortest format.

"This is Virat's decision but I don't think he should leave the other two formats' captaincy. If he wants to play just as a player, it is his decision. I feel India are playing well under his captaincy. His records as a captain are superb. It's his personal decision whether he wants to continue as the ODI and Test captain or not. According to me, he should lead India because he is a good player, a good captain who leads from the front," Sehwag said while responding to the fan's query in a video posted on Facebook.

Also Read: Kohli should hand over captaincy to Rohit for India's match against Namibia: Sanjay Manjrekar

While Kohli is yet to win a major ICC trophy as a captain in limited-overs formats, he has led the team to the final of the Champions Trophy in 2017 and the semi-final of the ODI World Cup in 2019. In Tests, he has become India's most successful captain with 38 wins in 68 matches as a skipper of the team.

Kohli also led India to the final of the inaugural edition of the World Test Championship earlier this year. However, his captaincy stint has failed to produce a major ICC trophy triumph for India so far. It remains to be seen who will BCCI replace Kohli with as captain in the T20Is and whether the run machine will continue captaining India in ODIs.