Virat Kohli should hand over captaincy to Rohit Sharma for India's match against Namibia: Sanjay Manjrekar 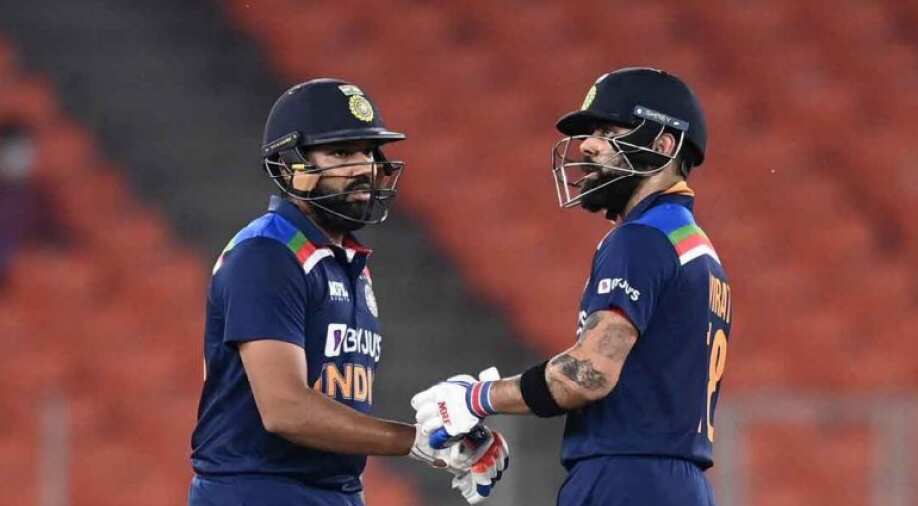 Should Kohli hand over captaincy to Rohit for India's last game against Namibia in T20 WC 2021? Photograph:( AFP )

Former India cricketer and expert Sanjay Manjrekar has said Virat Kohli should hand over the captaincy duties to Rohit Sharma in the team's final game against Namibia at the T20 World Cup 2021 on Monday (November 08).

India will take on Namibia in their final Super 12 clash of the ongoing T20 World Cup 2021 on Monday (November 08). India have already been knocked out of the race for a spot in the semi-finals after Afghanistan's 8-wicket defeat at the hands of New Zealand on Sunday, but Virat Kohli & Co. will be hoping to sign off from the tournament with a win.

The Namibia game will also mark an end to an era in Indian cricket as it will be Kohli's last T20I game as the captain of the Indian team and head coach Ravi Shastri's final game in charge as well. While Kohli has already announced he will be stepping down from the post of captain in T20Is, Shastri will also be relinquishing the Indian team's head coach post for Rahul Dravid after the T20 World Cup 2021.

"If Virat Kohli wants to sort of start a new trend, the inevitable future in T20 cricket, he could maybe offer the leadership straightaway to Rohit Sharma in this final game. Then Rohit Sharma may not be rested and play as captain," Manjrekar said in a video for Dafa News.

Rohit is one of the frontrunners to replace Kohli as India's captain in T20Is with an illustrious captaincy record in the Indian Premier League. Rohit has led his side Mumbai Indians to a record five IPL titles and is the most successful captain in the history of the league.

He is likely to lead India in their upcoming T20I series against New Zealand and might be appointed as the full-time captain in T20Is keeping the next year's T20 World Cup in mind.

IPL retention wrap: All you need to know about who is retained and who's not ahead of mega auction