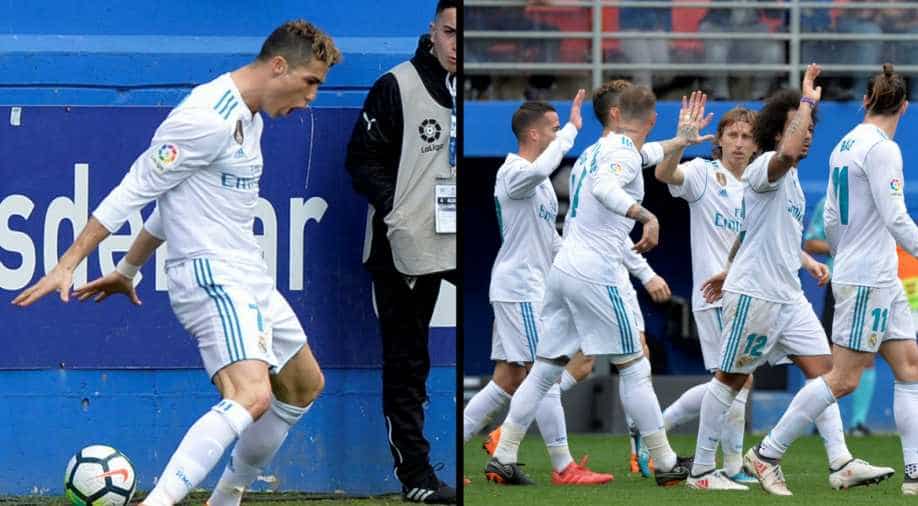 Cristiano Ronaldo struck late with a bullet header to give Real Madrid a 2-1 win at Eibar in La Liga on Saturday, taking his side to within four points of second-placed Atletico Madrid.

Ronaldo scored for the seventh successive game in all competitions by blasting into the net in the 34th minute after chesting down a long ball by Luka Modric, but eighth-placed Eibar pegged the champions back when Ivan Ramis outjumped Sergio Ramos to head home from a corner in the 50th.

Ronaldo was denied by an inspired save by Eibar's Marko Dmitrovic, who clawed away the Portuguese's header following a cross from Gareth Bale.

The irrepressible striker had the final say, however, meeting a cross from Dani Carvajal in the area and powering the ball beyond the Serbian goalkeeper in the 84th minute, scoring the 13th goal in his last seven games in all competitions.

Ronaldo has roared back from a feeble start to the season, when he scored just once in his first eight league games, to reach 18 goals in the campaign.

His double against Eibar allowed him to move into the top three scorers in the league, trailing Barcelona duo Lionel Messi and Luis Suarez on 24 and 20 respectively.

"He knows he's going to score, he's unique and special. His stats speak for him. And he's our player. He's always positive and if he scores twice, he wants to score a third."

Tiny Eibar is in contention for a European place next season and made the better start to the game, with Zidane admitting his side struggled in the opening stages.

"This victory makes me feel very good because they were the better side for a while, they played very well," added the coach.

"This is a very difficult ground to come to and they know how to play here. We knew we were going to suffer and we did, we had trouble getting hold of the ball but we fought together with character and got the win."

Valencia tightened their grip on fourth place in the standings and took a giant leap towards returning to the Champions League by winning 2-0 at Sevilla, opening up an 11-point gap with the Andalusians in fifth place.

Spain international Rodrigo Moreno scored either side of halftime to inflict a third home defeat in little more than two months on Sevilla, whose best chance of getting back into Europe's elite competition now likely rests on them winning the tournament.

Vincenzo Montella's side visits Manchester United on Tuesday in a last-16 second leg, with the tie finely balanced at 0-0.

"The first thing we need to do is forget about this disappointment and focus on Tuesday's game," Montella said.