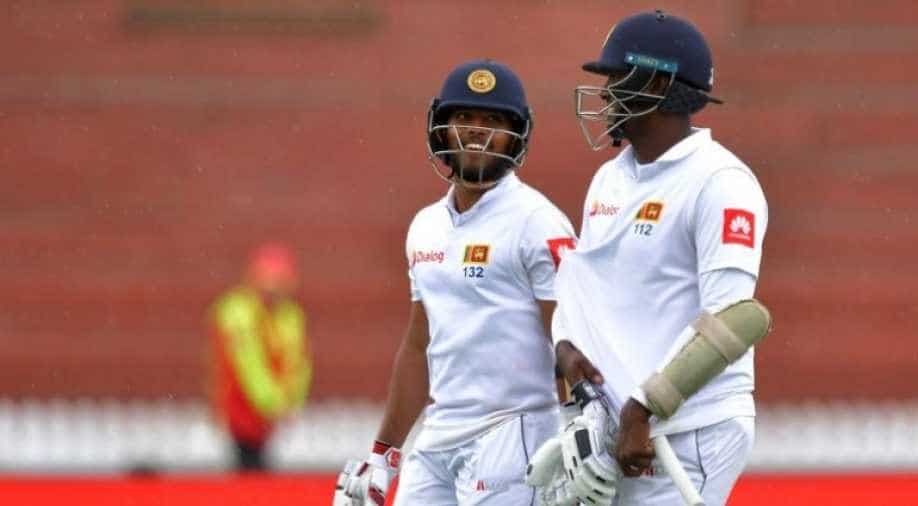 Kusal Mendis was 141 not out and former captain Angelo Mathews on 120 with their side 287 for three in their second innings, still nine runs shy of New Zealand's mammoth first innings of 578.

Rain washed out the fifth and final day's play of the first test between New Zealand and Sri Lanka on Wednesday after the visitors had virtually assured themselves of a draw with a battling second innings performance on the fourth day.

Kusal Mendis was 141 not out and former captain Angelo Mathews on 120 with their side 287 for three in their second innings, still nine runs shy of New Zealand's mammoth first innings of 578.

Bad weather had been forecast to interrupt most of Wednesday's final day and light rain delayed the start of play for 90 minutes until 12:30 p.m. (2330 GMT).

The visitors resumed on 259 for three and Mendis and Mathews were rarely troubled before a light shower forced them from the field just ahead of the scheduled lunch break of 1:30 p.m.

A southerly change during lunch, however, brought heavy showers across the ground and umpires Rod Tucker and Michael Gough had little option but to abandon play just before 4 p.m.

New Zealand had dominated the first three days of the match, dismissing Sri Lanka for 282 early on the second day, then batted themselves into a match-winning position with Tom Latham's unbeaten 264 driving them to their big total.

Tim Southee and Trent Boult reduced the visitors to 13 for three in their second innings late on the third day before Mathews and Mendis stonewalled New Zealand's pursuit for victory.

The pair batted throughout the entire fourth day, the first time a wicket had not fallen on a complete day's play in test cricket in more than a decade.

The draw ensures that New Zealand can no longer move to second in the world test rankings at the conclusion of the two-match series.

The second game begins on Dec. 26 at Hagley Oval in Christchurch.