Very happy with return ahead of Australian Open: Djokovic 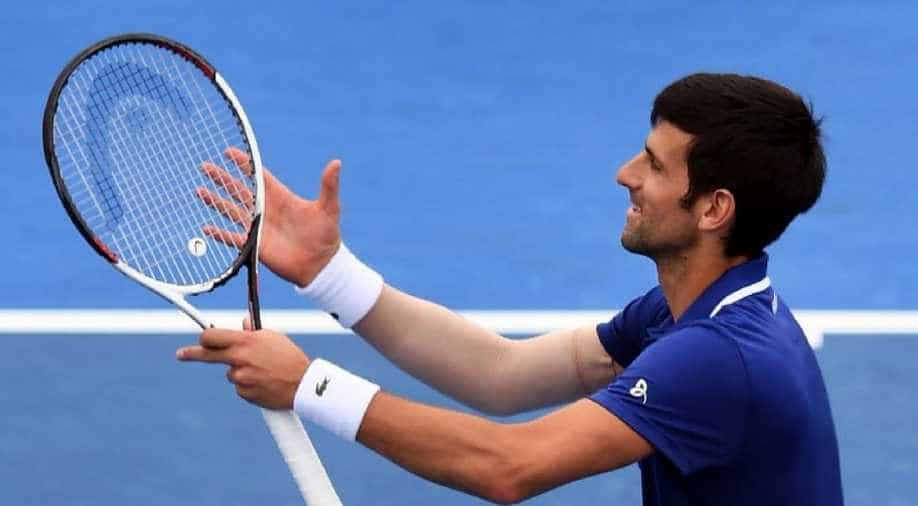 Novak Djokovic of Serbia waves to the crowds after winning his match against Dominic Thiem of Austria at Kooyong Classic tennis tournament. Photograph:( AFP )

Novak Djokovic returned after six months with a bang. He defeated Dominic Thiem 6-1, 6-4 in straight sets. He was suffering from an elbow injury and has not played since Wimbledon in July, where he was ruled out by Tomas Berdych in the quarterfinals.

The exhibition match at Kooyong was his first match of the year. His performance showed no signs of injury. He was in good form and full of optimism as he played exceptionally well.

The Serbian 12-time Grand Slam winner could not control his smile after the winning the match and in the post-match presentation, said that he felt "great" after defeating world number five Dominic Thiem.

Djokovic has dropped to number 14 in the world ranking but seemed fit enough to chase his record seventh Australian Open crown next week.

"I feel great, I was eager to get onto the court," he said after playing with a flesh-coloured sleeve on his right arm.

"I had a great opponent, it was a test for me to see where I am, how the work we did pays off on the court. It worked pretty well."

"There was a doubt, especially after I pulled out of the first week of the year," he admitted.

Really looking forward to #TieBreakTens Melbourne Jan 10. Excited to try out this new fast paced format. It’s a great line up and I can’t wait to get out on court! Are you ready? @RafaelNadal @stanwawrinka @tomasberdych @ThiemDomi.. ???? #EveryPointCounts pic.twitter.com/ZSc3bUkICA

"I personally didn't know what's going to happen. We did some treatment and obviously gave it a lot of thought. Luckily for me, I'm here and so I'm hoping in the next four, five days everything will go well and I'll be ready for the Open."

"I don't want to be over-confident, but I'm very, very happy with how it went today," added the 30-year-old.

"I don't say I'm at 100 percent, I can only say that when I get the feel of a tournament. Ideally, I would have had another tournament before the start of the Open,  but it was not meant to be.

"I'll take whatever I can -- one or two matches here will be good preparation."

"Especially the serve – that was the biggest question mark because of the elbow, that shot in my game was compromised."

Thiem, who only arrived in Melbourne on Monday night from Doha after four days in bed with a virus, presented only a minimal challenge to the recharged Serb.

"I'm free of fever and healthy again," the Austrian said. "I'm still jet-lagged and was slow at the beginning of the match. I'll sleep, eat and train and not do too much. I'll be fine for the Open."

"The most important thing is to feel the conditions, to get comfortable," he said. "It's important to find a good rhythm.

"Overall, I'm quite happy with my level. I was feeling the ball well and hitting cleanly from both sides."

"I'm hoping in the next four or five days everything will go well and I’ll be ready for the Open."