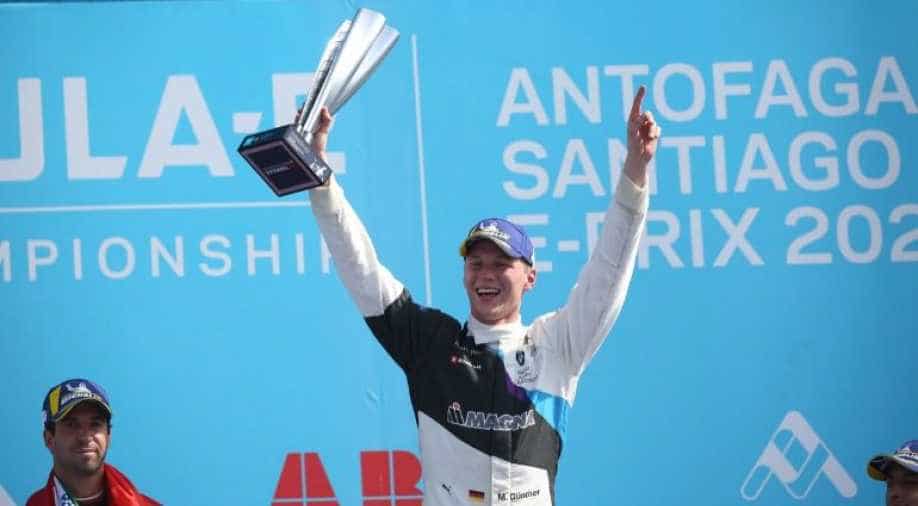 Belgian Stoffel Vandoorne finished sixth for Mercedes to take the overall lead in the all-electric series from Guenther's teammate Alexander Sims, who retired.

BMWi Andretti driver Max Guenther became Formula E's youngest winner on Saturday when the 22-year-old German pulled off a last-lap overtake in the third round of the season in the Chilean capital Santiago.

Belgian Stoffel Vandoorne finished sixth for Mercedes to take the overall lead in the all-electric series from Guenther's teammate Alexander Sims, who retired.

+ the full race results from the 2020 Antofagasta Minerals #SantiagoEPrix pic.twitter.com/Ty4ixK9cu1

Guenther passed DS Techeetah's Antonio Felix Da Costa with two corners to go after the Portuguese, who had started 10th and went into the lead with two laps to go, had to slow due to soaring battery temperatures on a hot afternoon.

New Zealander Mitch Evans started on pole position at the Parque O'Higgins, led the first half of the race for Jaguar and completed the podium in third place.

WE DID IT! My first win in @fiaformulae! Words can’t describe how happy I am about P1 at the #SantiagoEPrix. What an incredible feeling! 🏆🍾#MAXG #RacingBeyond #ABBFormulaE #winner pic.twitter.com/SC0iSvQtBj

Evans finished behind Nyck de Vries on track but the Mercedes driver was demoted with a five-second time penalty due to excessive battery temperature and dropped to fifth.

"Without a doubt, we made a mistake with cooling the battery on Nyck's car. That compromised his sublime driving today," commented Mercedes EQ team principal Ian James.

"That was a tough and highly eventful race for me," said Vandoorne. "My car was clattered into from all sides and afterwards didn't drive 100% straight."

Reigning champion Jean-Eric Vergne, for Techeetah, was another retirement with front wing and tyre problems after he had moved up into third place in a lively race.

Venturi's Felipe Massa was forced into the wall by his teammate Edoardo Mortara and ended up eighth.

The next race is in Mexico City on February 15.