Maurizio Sarri not sure about Kepa Arrizabalaga's return to Chelsea team 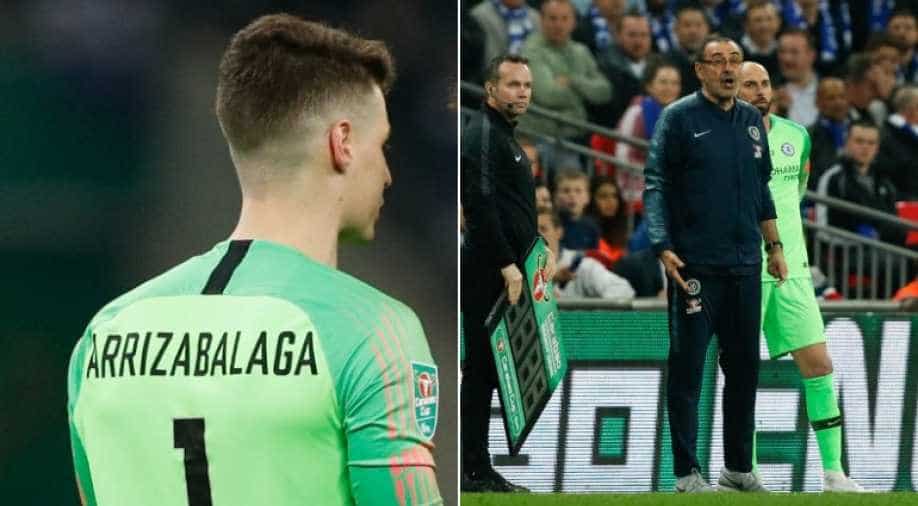 Chelsea's Italian head coach Maurizio Sarri (C) reacts after goalkeeper Kepa Arrizabalaga remains on the pitch after an attempt to substitute him for Willy Caballero. Photograph:(AFP)
Follow Us

Sarri said Chelsea's players had to take the opportunity to come closer together after the incident at Wembley last week.

Chelsea goalkeeper Kepa Arrizabalaga remains the club's first choice but manager Maurizio Sarri is still uncertain if the Spaniard will be recalled to the starting team for Sunday's Premier League trip to Fulham.

Arrizabalaga was fined by the club for his refusal to be substituted by Sarri near the end of extra time in Sunday's League Cup final defeat by Manchester City and he was dropped for Wednesday's 2-0 league win over Tottenham Hotspur.

"I'm sure in one of the two next matches he will be on the pitch," Sarri told a news conference, suggesting Willy Caballero could continue in goal after making his first league appearance of the season against Tottenham.

"Kepa's the first choice, of course, he is very young, he's improving, we know very well that he can become one of the best goalkeepers in Europe," Sarri added.

"But in this moment we know that Willy is doing very well. He (Arrizabalaga) is very important in our group and dressing room, so we need to consider him."

Sarri said Chelsea's players had to take the opportunity to come closer together after the incident at Wembley last week.

"After a difficult situation, a group is not the same. So there is the opportunity to be better, and you have to take it," the Italian added.