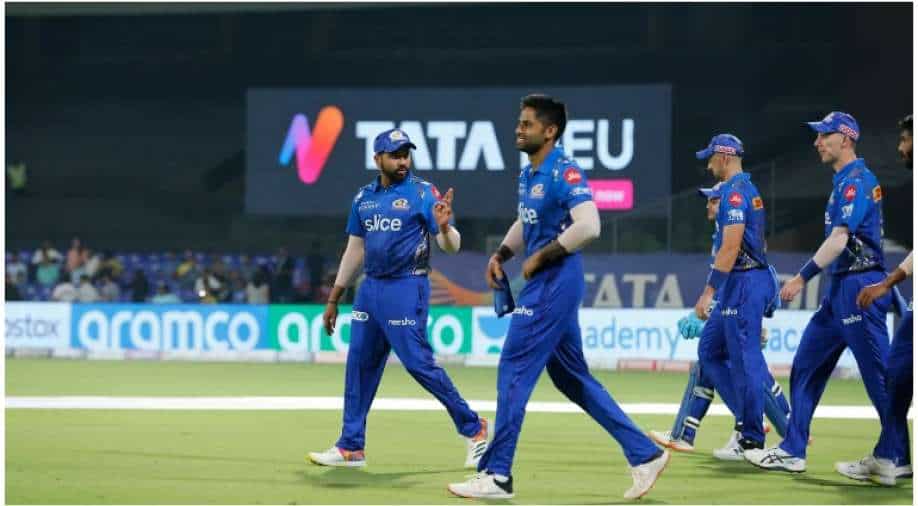 IPL 2022: Rohit Sharma & Co. pulled off a heist as they beat table-toppers Gujarat Titans by five runs in matchb 51.

Match 51 of the IPL 2022 edition saw the table-toppers Hardik Pandya-led Gujarat Titans (GT) face the bottom-lying Mumbai Indians (MI) at the high-scoring Brabourne Stadium, Mumbai on Friday evening (May 06). Desperate for another win to make for the playoffs, Hardik & Co. failed to get past the finish line -- to lose two in a row -- as the Rohit Sharma-led MI franchise pulled off a heist by five runs in defence of 177-6.

Opting to bowl first, Hardik-led GT were in for a leather hunt as MI openers Rohit (43) and Ishan (45) took the team off to a confident start. From 74 for no loss, MI struggled from there on as Rashid Khan applied pressure with his bowling and removed Rohit and Kieron Pollard. Tim David's 21-ball 44 not out propelled MI to a healthy 177 for 6. However, at the mid-innings, it felt as if the five-time winners were easily short by 15-20 runs given the kind of start they enjoyed.

In reply, Gujarat openers Wriddhiman Saha and Shubman Gill took their team off to a rollicking start. Saha was the aggressor among the duo as young Gill also grew in confidence and joined the party later. Jasprit Bumrah went for quite a few in his early overs as Rohit looked a tense captain. Against the run of play, Murugan Ashwin applied the pressure with his tidy bowling and was rewarded with the scalps of Saha and Gill.

While Hardik got a start before being run-out for a 14-ball 24, Sai Sudharshan was hit-wicket for a 11-ball 14. With wickets falling in the death overs, MI clawed their way back into the contest as Bumrah bowled a good over to end his spell whereas Daniel Sams defended 9 runs off the last six balls to stun GT.

With this win, MI remain at the bottom but have suddenly found some momentum -- despite an early exit -- with back-to-back wins.