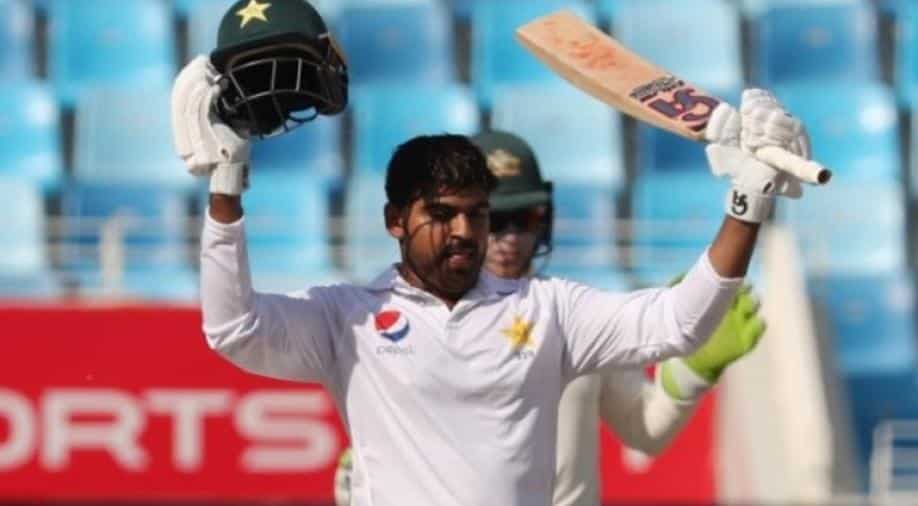 Pakistan's Haris Sohall (L) gestures as he celebrates his century against Australia during day two of the first Test match. Photograph:( AFP )

Pakistan's Haris Sohail struck his maiden test century as they ended the second day of the first test against Australia with a lead of 452 in Dubai on Monday.

Sohail and Asad Shafiq (80) put on 150 for the fifth wicket on a placid track at the Dubai International Cricket Stadium as Australia's bowlers toiled in the intense heat.

Australia had delayed taking the new ball in their quest to generate some reverse swing and help their spinners but it did not really pay off.

Their quicks bowled tight overs in the first hour to stifle the Pakistan batsmen who had little difficulty in negotiating the spin of Nathan Lyon or Jon Holland.

Paceman Peter Siddle gave Australia an early breakthrough when he bowled nightwatchman Abbas for one with a hint of reverse swing.

Siddle was the pick of the Australian bowlers and ended with figures of 3-58 off 29 overs.

Sohail and Shafiq grafted through the afternoon session until Marnus Labuschagne`s occasional leg-break proved Shafiq's downfall as he edged to keeper Tim Paine.

Babar Azam was run out for four before Sahail's attempted cut off Nathan Lyon ended up in Paine's gloves.

Another run out resulted in the wicket of Safraz Ahmed (15) before the tourists wrapped up the tail and left their batsmen with an unenviable 13 overs to face after a long day in the field.

Australia openers Usman Khawaja (17) and Aaron Finch (13) negotiated that session well but there are signs the ball is beginning to turn which will encourage Pakistan`s trio of slow bowlers.