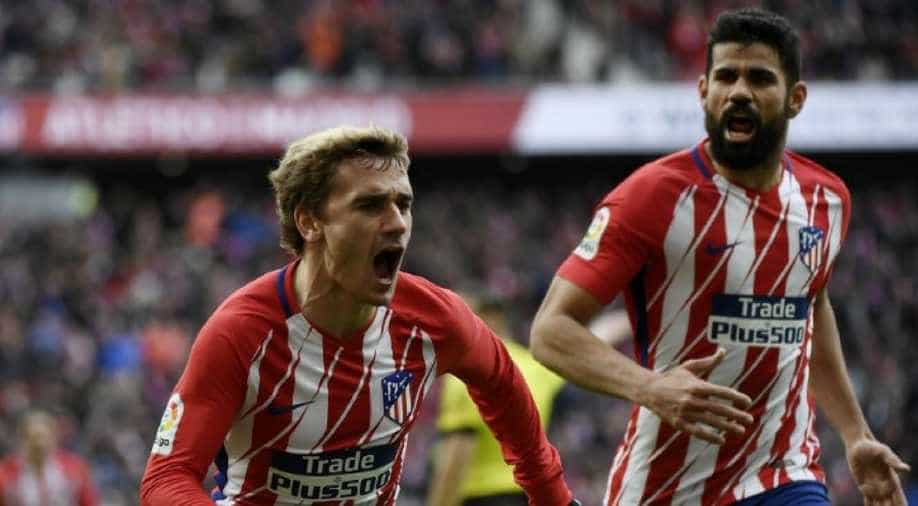 In-form Antoine Griezmann scored one goal and made another as Atletico Madrid cruised to a 3-0 win over Celta Vigo in La Liga on Sunday, consolidating their grip on second place.

Griezmann opened the scoring just before the break at the Wanda Metropolitano with his 16th goal of the season in La Liga, his 11th in the last nine games.

The France star, who continues to be linked with a summer move to Barcelona, then set up Vitolo to make it 2-0 before Angel Correa, on as a substitute, wrapped up the points for Diego Simeone's side.

It was a seventh win in eight La Liga outings for Atletico, the exception being last weekend's 1-0 loss at Barcelona.

As a result, the 2014 champions remain eight points behind league leaders Barca, but they are seven clear of Real Madrid in third.

"There is still a long way to go. We take things one game at a time and we will try to continue that way," said Simeone of his side's title chances.

"My desire is to be in with a chance with five games left. Then we will be able to speak about something more."

Griezmann's goal on Sunday came a minute before the break as he controlled the ball at the back post following a corner and showed some brilliant footwork to take a Celta defender out of the game before firing into the far corner.

He turned provider in the 56th minute with a pass for Vitolo, who beat Ruben Blanco in the Celta goal with a clipped finish.

Vitolo's last three goals in La Liga have now been for three different teams -- he previously netted for Sevilla and then scored for Las Palmas against Celta earlier this season.

Correa came in for Vitolo just before the hour and got on the scoresheet four minutes later, finishing low into the net after his initial effort had been blocked.

It was Atletico's second 3-0 win at home in four days after they beat Lokomotiv Moscow by the same scoreline in their Europa League last 16, first leg on Thursday.