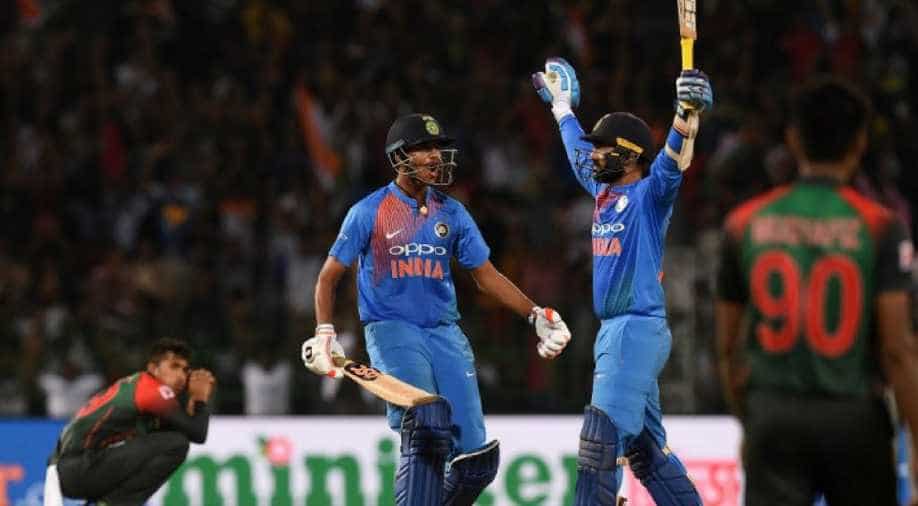 Dinesh Karthik, the hero of the match, played exceptionally well as India beat Bangladesh in the finals of Nidahas Trophy T20 tri-series at the R. Premadasa Stadium on Sunday.

At a moment when Manish Pandey lost his wicket and India needed 34 runs with 2 overs remaining, it was looking next to impossible to win from there but Dinesh Karthik came in and outplayed Bangladeshi bowlers.

Dinesh played at an average of 362.50 and scored 29 crucial runs in just 8 balls. For this splendid inning, he was honoured with the man of the match award.

Washington Sundar received Man of the Series award for his brilliant performance in the series.

Bangladesh failed to strategise the last overs properly as the jinx of not winning T20 match against India continues.

In the beginning, India lost its first wicket in the form of opener Shikhar Dhawan in the third over.

Just after that, Suresh Raina lost his wicket by edging the ball in the hands of wicket-keeper Mushfiqur Rahim and returned to the pavilion at a duck.

The ball was declared as a wide ball but skipper Shakib Al Hasan contested the decision and took a successful review.

Rohit Sharma found a determined ally in KL Rahul to achieve the set target of 167 runs but the latter lost his wicket after scoring 24 runs for the team.

Rohit salvaged Indian innings but sliced the ball in the hands of a fielder at long-on. He was going for a big hit but the bowler delivered a full-length ball without giving enough room so that Rohit could not stretch his hands.

Manish Pandey tried to push the run rate and scored 28 runs for the team but due to the pressure of hitting more, he lost his wicket by giving an easy catch at long-on in the hands of Sabbir Rahman.

Role of Vijay Shankar cannot be snubbed as being a non-batsman he helped with his bat and scored very important 17 runs for the team and kept rotating the strike.

Earlier, India won the toss and opted to bowl against Bangladesh in the final of the Nidahas Trophy T20 tri-series at the R Premadasa Stadium on Sunday.

Playing first Bangladesh had a crashing start as Washington Sundar sent the first warning by dismissing opener Liton Das (11) in fourth over.

Then Shabbir Rahman came at number 3 and salvaged the innings by hitting 77 runs but got bowled at on a brilliant delivery of Indian pacer Jaydev Unadkat.

Chahal struck again and saw off wicket-keeper batsman Mushfiqur Rahim at a low score of 9 runs.

Mahmudullah (21) and skipper Shakib Al Hasan (7) fell short in running between the wickets returned to the pavilion.