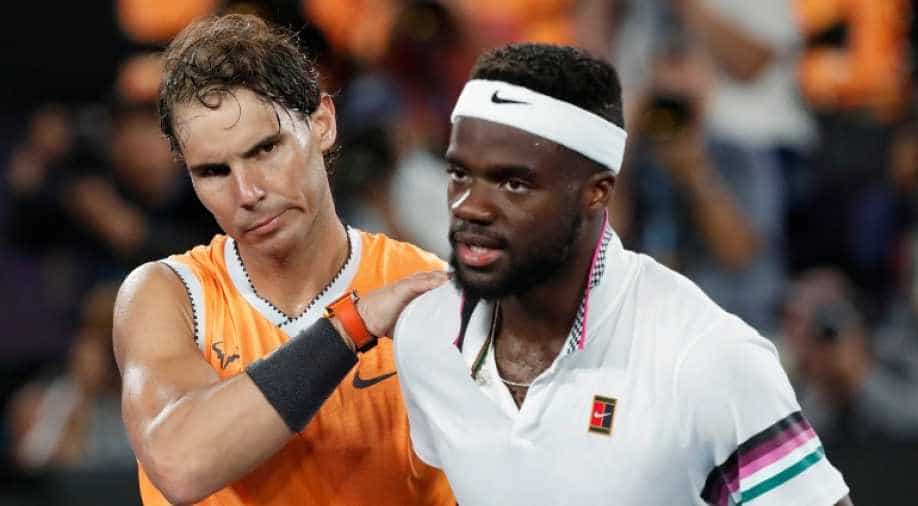 Spain's Rafael Nadal and Frances Tiafoe of the US after the match. Photograph:( Reuters )

Nadal's match against Tiafoe, who turned 21 on Sunday, was billed as an intriguing clash of generations after Roger Federer's loss to Tsitsipas, but the second seed was ruthless as he reached the last four without dropping a set.

Rafa Nadal kept the flag flying for the old guard at the Australian Open with a 6-3 6-4 6-2 win over American Frances Tiafoe on Tuesday for a place in the semi-finals where he will meet another next generation player in Stefanos Tsitsipas.

Nadal's match against Tiafoe, who turned 21 on Sunday, was billed as an intriguing clash of generations after Roger Federer's loss to Tsitsipas, but the second seed was ruthless as he reached the last four without dropping a set.

The 17-times Grand Slam champion broke Tiafoe's first service game in each set and with a second break in the third set wrapped up victory in an hour and 47 minutes.

"I felt having the break at the beginning of every set, that gave me a lot of confidence. Then I was serving well, playing solid," Nadal told reporters.

Nadal was forced to retire hurt in the fifth set of last year's quarter-final against eventual finalist Marin Cilic, eight years after pulling out midway through his last-eight clash against Andy Murray with a knee injury.

"It's very emotional for me to be back in the semi-final in Melbourne," Nadal said on court. "I had some troubles in this event all my career.

"To be back to the semi-final without playing for a while means everything to me. So I just want to say thank you very, very much everybody. Great feelings, to be able to play in this court is always so special.

"And of course I'm very happy with the way I played tonight."

Doubts about his ability to withstand seven matches on hardcourts were reinforced when he retired in the U.S. Open semi-final against Juan Martin del Potro last year. His season also ended early with ankle surgery and an abdominal injury.

Nadal is leaving no stone unturned in Melbourne to win another major and has brought a remodelled serve aimed at generating more pace which once again worked effectively on Tuesday.

His serve was only threatened in the fourth game of the second set but the Spaniard, who is bidding to become the first man in the Open Era, and only the third man ever, to win each of the four Grand Slams twice, saved both breakpoints he faced.

Tiafoe, the son of immigrants from Sierra Leone, was content with his performance and said it was an "unbelievable" experience on Rod Laver Arena.

"But point in, point out, I've never seen someone so locked in."

For a place in the final, Nadal will meet 20-year-old Greek sensation Tsitsipas, who earlier on Tuesday became his country's first player to reach the last four at a major with a 7-5 4-6 6-4 7-6(2) triumph over Spaniard Roberto Bautista Agut.

After destroying Alex de Minaur, the highly-regarded 19-year-old local, in straight sets in the third round and Tiafoe in the last eight, Tsitsipas will be the latest youngster to test Nadal.

"When you face these young players, they are in permanent improvement. He's with confidence. He won a lot of good matches. Will be a tough one," Nadal said.

"For me is always the same: you are in the semi-finals of a Grand Slam, you can't expect an easy opponent. Stefanos is one of the best players of the world.

"To have the chance to be in that final, I need to play my best, and that's what I am looking for."