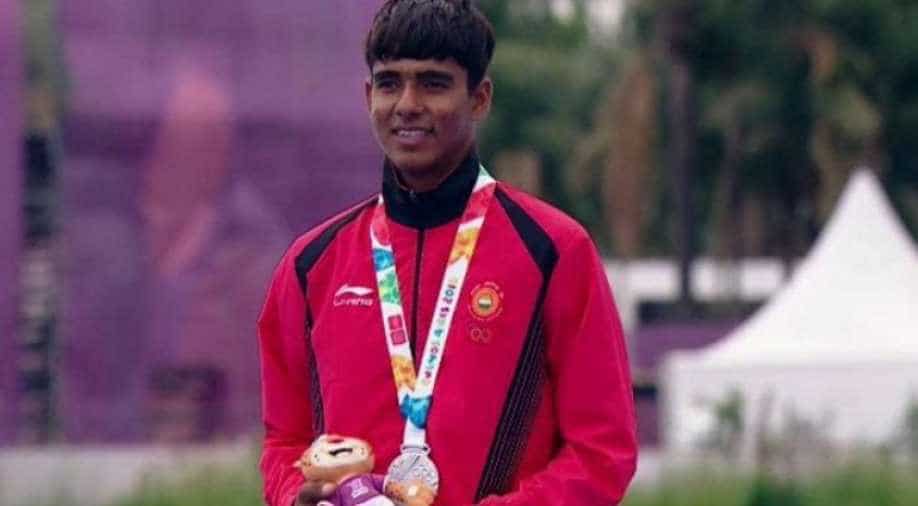 The 15-year-old lost a one-sided final to Trenton Cowles of the USA 0-6 as India concluded with three gold, nine silver, and one bronze at the event.

The 15-year-old son of a farmer lost a one-sided final to Trenton Cowles of the USA 0-6 as India concluded with three gold, nine silver, and one bronze at the event that was launched in 2010.

Seeded fifth after qualification, the Haryana-boy was inconsistent in the summit clash against the 15th seed Cowles, who only shot in 10s and 9s to wrap it up easily on Wednesday night.

In the three-setter, both the archers shot four perfect 10s, but Akash's two wayward 6s in the first and the third set proved to be the decisive factor. The summit clash was held under windy conditions following light rains.

"I have trained in the wind, but here it was too much. I was waiting for an opportunity but he (Cowles) was stronger and I had no chance," Akash told PTI.

"I feel good but I lost the gold medal," the 11th standard school-boy said after bettering Atul Verma's feat of a bronze at the Nanjing edition of the Games in 2014.

Akash took up archery six years ago after Manjeet Malik, a physical-trainer-turned-archery-coach, picked him during a trial.

"One day my friends took me to a field where I saw kids aiming at a target with arrows. Mujhe laga woh shikaar kar rahe hain (I thought they were hunting something)," Akash said.

Akash, who used to play cricket with his friends, developed a fascination for the 'new-found sport'.

"Mujhe laga mein kuchh kar sakta hoon (I thought I could do something)," he said.

Akash's father Narender Malik, who is into wheat and cotton farming, never wanted his son to join him at the fields.

"Initially my parents dissuaded me as they wanted me to study to land up a government job. But after I started winning medals they have started backing me fully. They must be very happy now," Akash, who will return to India with the contingent on Sunday, said.

"Now I've to put in more effort and hope to qualify for Tokyo Olympics," he said about his mission 2020.

His coach Manjeet Malik said Akash's ability to remain calm had impressed him.

"He was very calm and composed and I thought he could shoot arrows steadily. He now shoots with confidence. It was raining as well when the final started," the coach said.

In 2014, Akash was part of the recurve boys team which won a gold medal at the mini national (under-14) archery championship in Vijayawada.

Akash went on to clinch a gold medal in the Youth Olympics qualifying event last year.

"It's indeed a proud moment for me and all the hard work is now paying off," Malik, who has about 80 students at his private academy, said.

Akash is currently enrolled by the Olympic Gold Quest and trains under South Korean coach Kim Hagyong at the Army Sports Institute in Pune.

Making a solid start to the final, Akash started off with a 10 but then he shot a 6 in his second arrow and concluded the first set with another perfect 10.

Under pressure in the third set, Akash shot another six that ruined his chances of a gold medal. He finished with two 10s but Cowles remained steady and sealed the issue 28-26 in the third set.