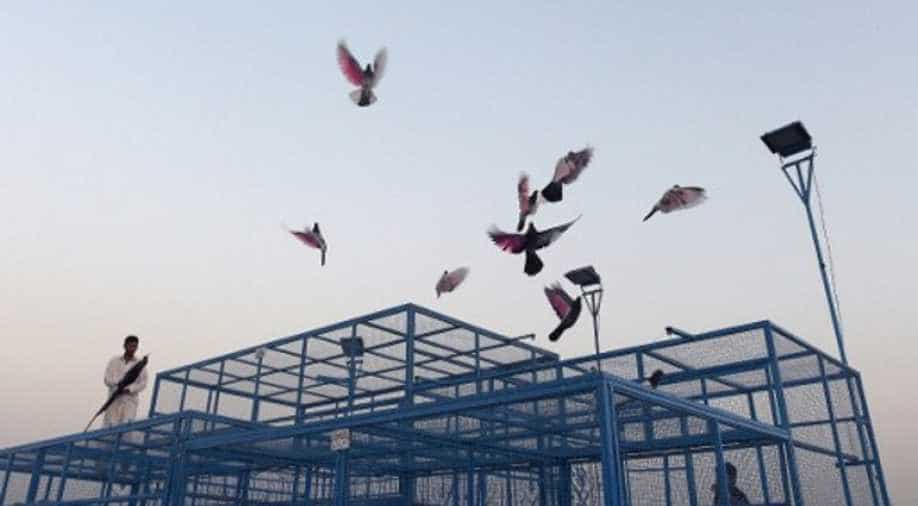 In this photograph taken on May 31, 2016, a Pakistani caretaker releases racing pigeons from their cage on the final day of the pigeon race national championship in Islamabad.? Photograph:( AFP )

Follow Us
A flock of pigeons take off from a Lahore roof top at dawn, rising above the city's Mughal-era minarets before disappearing out of sight.

Rather than being viewed as pests, these birds are champions of endurance who evoke a passionate following across Pakistan.

"It is a love affair," says Akhlaq Khan, a famous octogenarian pigeon-fancier and author of the only book on the subject in Pakistan. "You don't see anything there, no difference between the birds," he says, cradling a plump bird with a white body and coloured head.

"But I can tell the worth of each bird by looking at the eyes and feathers."

On his rooftop in a leafy district of Pakistan's cultural capital, hundreds of birds are cooing in massive light blue cages in the sweltering Punjabi summer.

In film and folklore, pigeons, or 'kabootar' are associated with love letters destined for harems and for military orders sent to champion warriors by kings of yesteryear.

"Flying breeds in India were introduced by the Mughals," says Khan referring to the Muslim dynasty that ruled the subcontinent from the early 16th century till the mid-19th.

Pigeon followers broadly class the birds into those known for their competitive flying ability, and those prized for their looks.

Mughal emperor Akbar was renowned for his passion for pigeons, and, according to one scholar of the court "had 20,000 birds of different types", said Khan.

Millions of fans across the country are enthralled by low and high altitude flying competitions, and races in which opponents attempt to distract each others' birds, etc.

It is a rare pastime that brings together people from different social backgrounds - experts are often illiterate and the owners are rich. A good pigeon can be valued at hundreds of dollars, equivalent to several months salary for many Pakistanis.

Bird cages and enthusiasts can be found on rooftops in the old districts of cities across the country.

Pakistani pigeons and experts have also been taken by Arab royals for tournaments in the Gulf.

For so-called 'high-flying' pigeons, the rules are simple: at dawn, each team of seven or eleven pigeons take off from their perches, spend the day flying out of sight, and when they return at nightfall, the flight time of each pigeon is added up and an average is calculated.

The winning team is the one which has the longest average flight time after a total of seven or eleven flights held every two days.

"We fly pigeon around 5 in morning after stamping them, and if the pigeon comes back around 4 to 5 in the evening we consider them good," explains Syed Mehtab Shah, a participant in the Bahrain Cup, one of a number of tournaments organised in spring and autumn.

"I love beating my competitors, it brings me joy and fame," explains the pigeon-fancier from Islamabad, surrounded by several friends who have come to see his pigeons land one evening following an endurance flight.

The conversation halts as two birds, which spent the day flying at 3,000 metres and are recognisable by the pink paint daubed under their wings, come in to land.

Grabbing binoculars, the audience admire the birds` precision landing, which was guided by flags.The best champions, capable of flying for more than 12 hours without food or drink in exhausting heat, are showered with luxurious treatment often reserved for humans. The pigeon masters, known as 'ustads', give their birds long massages with a damp towel and special concoctions to boost performance.

In his book, Khan reveals his diet plans for the winged athletes: crushed almonds, cardamom and Indian lotus seed powder, as well a 'water of life' laced with cumin, pepper and other spices.

He speaks too of the benefits of port and whisky, illegal in Pakistan, precious saffron and ginseng.

There is no governing body regulating pigeon racing, so other less natural ingredients can creep in to the diet.

The victors can take home mobile phones, motorcycles and even cars - proving a winning bird in hand can be worth more than several in the proverbial shrubbery.

In this way, the story of love became a story of money. "It fell into disrepute because people started gambling," explains Khan.

And it has become necessary to deal with the inevitable jealousy.

Haider's wife spends long hours peeling almonds and cooking for her husband's guests during each competition.

She concedes shyly: "He spends more time with his birds than with me."