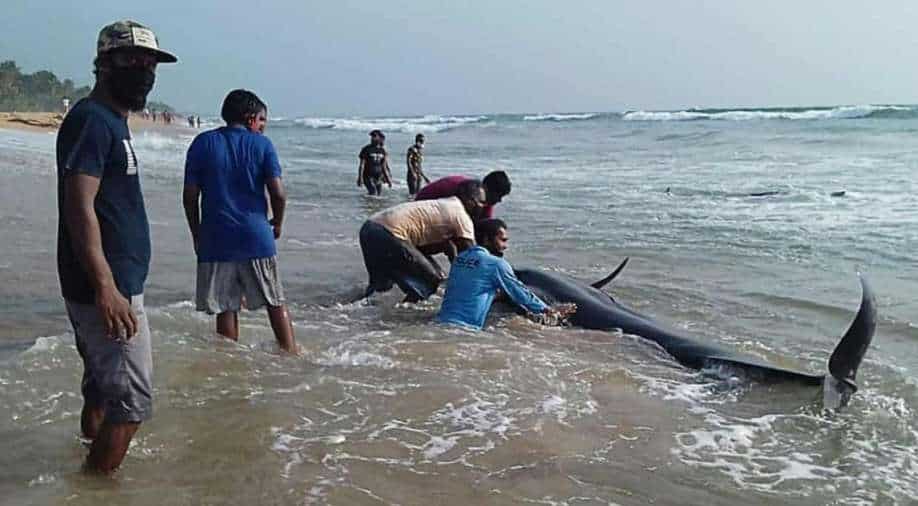 Sailors from the navy and the coastguard along with local volunteers pushed back at least 120 whales by dawn Tuesday after a gruelling overnight rescue, navy spokesman Indika de Silva said.

The school of short-finned pilot whales washed ashore at Panadura, 25 kilometres (15 miles) south of Colombo, since Monday afternoon in the biggest-ever mass stranding of whales on the island.

"We used our small inshore patrol craft to pull the whales one by one back into deeper waters," de Silva told AFP. "Sadly, two whales have died of the injuries sustained when they beached."

"It is very unusual for such a large number to reach our shores," MEPA chief Dharshani Lahandapura told AFP, adding that the cause of the stranding was not known.

"We think this is similar to the mass stranding in Tasmania in September."

Pilot whales, which can grow up to six metres (20 feet) long and weigh a tonne, are highly social.

The phenomenon of whales getting stranded in shallow water remains largely a mystery to scientists.

In September, several hundred whales died in shallows off the coast of Australia in its biggest stranding on record and one of the largest in the world.