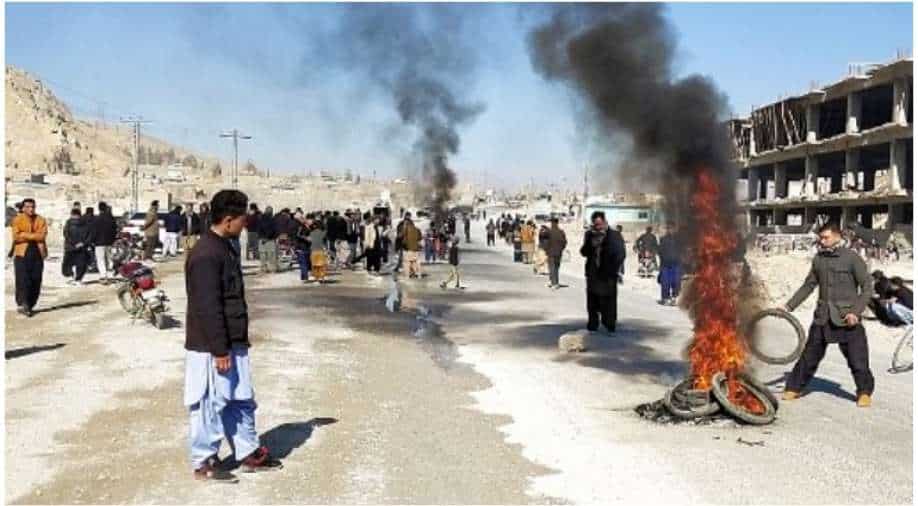 Members of Shiite Hazara community burn tyres during a protest after the killing of 11 workers of their community, in Quetta on January 3, 2021.  Photograph:( AFP )

Pakistan's restive Balochistan province saw 2,886 terrorist attacks and 3,184 related deaths in the last decade, according to a media report.

Among the 3,184 terror-related deaths in the last decade, 2,058 were civilians and 1,126 were security personnel, the news channel reported.

The numbers come in the backdrop of last week's brutal killing of 11 Shia Hazara coal miners by Islamic State terrorists in the province's mountainous Machh area.

The Shia Hazara community, who live in the border areas of Balochistan and Afghanistan, are the main targets of sectarian violence in the province as they are easily identifiable due to their distinctive physical appearance. Sunni militants consider them as heretics.

The families of the deceased coal miners had initially refused to bury the bodies till the militants were arrested. They ended their protest on Saturday last after Prime Minister Imran Khan promised to visit them.

Khan visited them on Saturday, saying the entire nation stands with them. The prime minister said his mission was to unite the people of the country, and the Muslim world at large.

Balochistan Home Minister Mir Ziaullah Langau on Monday said a large-scale operation would be launched against militants in the province.

''The operation will be extended till every terrorist is eliminated. Terrorists want to divide us on the basis of sectarianism and language. The people have thwarted every attempt of the terrorists in the past and will keep doing so in the future as well," Langau said, after chairing a high-level meeting in the aftermath of the killing of the coal miners, The Express Tribune reported.

The minister said the terrorists and their facilitators would be identified and eliminated.

However, critics of the Pakistan government said security forces may be given additional power during the anti-terror operation, leading to the harassment of innocent locals and the poor.