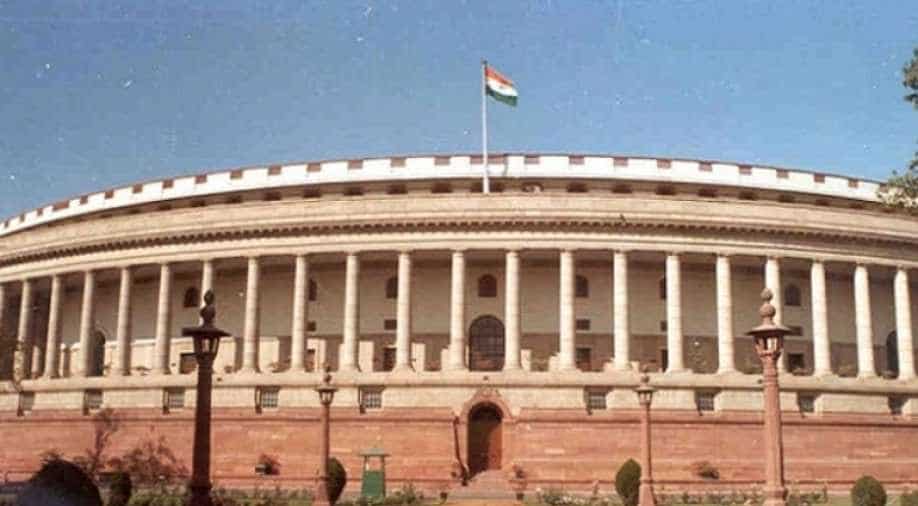 The Cabinet Committee on Parliamentary Affairs (CCPA) headed by Home Minister Rajnath Singh today met in New Delhi to deliberate upon the dates of the session. Photograph:( DNA )

Setting the stage for more political fireworks in Parliament, a Lok Sabha MP from the ruling Bharatiya Janata Party has been allowed to introduce a Private Member’s Bill in the Parliament that seeks to amend the Constitution of India to enable imparting of “religious education related to Hindu religion” in educational institutions which are wholly maintained out of State funds, if the majority of students studying in such institutions are Hindus.

The Bill, which is listed to be introduced in Lok Sabha on August 4, is likely to raise hackles of the Opposition parties, many of whom are already trying to corner the government over the latter’s alleged divisive agenda.

Lok Sabha’s Committee on Private Members’ Bills and Resolutions which examines Private Member Bills before clearing them to be introduced in the Parliament recently accorded its  approval to BJP MP from Kota (Rajasthan) Om Birla to introduce “The Constitution (Amendment) Bill, 2017 (Insertion of new article 28A)” in Indian Parliament’s lower House.

Birla’s Bill seeks to insert a new article 28A to the Constitution of India “with a view to provide that religious education related to Hindu religion shall be imparted in an educational institution wholly maintained out the state funds, if the majority of the students studying in that institution are Hindus”.

The Bill also provides “that such religious education shall not be compulsory for non-Hindu students studying in such institution” and also that “no Hindu student studying in such institution shall be compelled to such religious education”. While these clauses appear sufficient to quell any misconceptions about the proposed legislation, it is unlikely that the discussion on the Bill will not generate heat.

“After considering all aspects of the Bill, the Committee recommend that the member may be permitted to move for leave to introduce the Bill,” the Committee on Private Members’ Bills and Resolutions led by Lok Sabha Deputy Speaker M Thambi Durai stated. Birla has been a three-time legislator in the Rajasthan State Assembly and is a first-time Lok Sabha MP.

Clause 3 under Article 28 states that “no person attending any educational institution recognised by the state or receiving aid out of state funds shall be required to take part in any religious instruction that may be imparted in such institution or to attend any religious worship that may be conducted in such institution or in any premises attached thereto unless such person or, if such person is a minor, his guardian has given his consent thereto”.

The chances of a Private Member’s Bill getting passed in Parliament are usually remote. Since Independence, only a dozen-odd such Bills have managed to become laws. In fact, since Private Member’s Business is usually allowed in the post-lunch session on Fridays, most of these Bills don’t even reach the discussion stage. During the last Lok Sabha, as many as 300 Private Members’ Bills were introduced and just four per cent of them could be discussed, with the remaining 96 per cent lapsing without a debate.