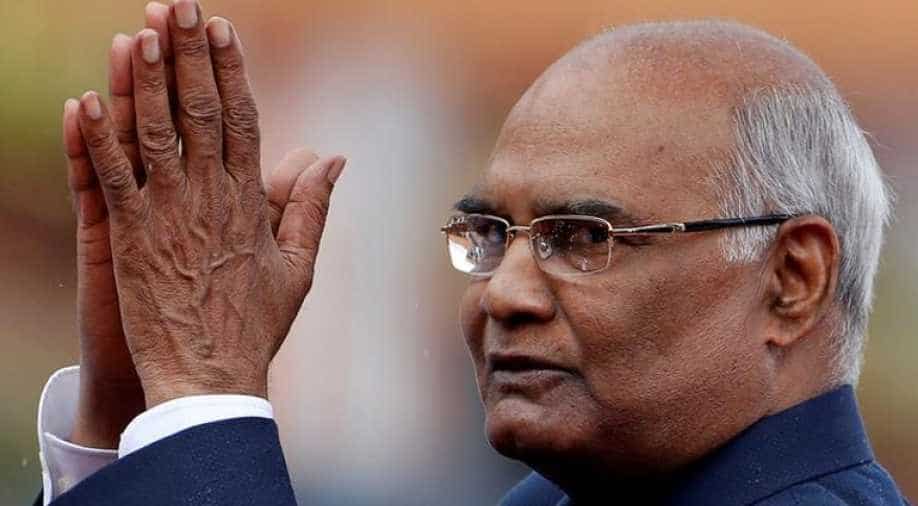 Kovind paid his respects to the slain security personnel and laid a wreath at the memorial during a remembrance service that marks the annual 'Valour Day' event of the Central Reserve Police Force (CRPF).

President Ram Nath Kovind Tuesday paid tributes to the police and paramilitary personnel killed in the line of duty, including the 40 CRPF men killed in the February 14 Pulwama terror attack, at the National Police Memorial here.

Kovind paid his respects to the slain security personnel and laid a wreath at the memorial during a remembrance service that marks the annual "Valour Day" event of the Central Reserve Police Force (CRPF).

The National Police Memorial, a 30-foot-tall and 238-tonne black granite structure, was unveiled by Prime Minister Narendra Modi on October 21 last year on the occasion of the police commemoration day.

It was for the first time that the President visited the memorial located in Chanakyapuri area of the national capital.

Kovind, the Supreme Commander of the Armed Forces, was accorded a "national salute" and presented a guard of honour by a joint column of troops from all the Central Armed Police Forces (CAPFs) such as the CRPF, BSF, ITBP, CISF and SSB.

The day is celebrated to remember a gallant fight back by the CRPF men at the Sardar post in Gujarat's Rann of Kutch in 1965.

The troops were posted on border-guarding duties that time and the event is mentioned as one of the glorious chapters in the country's military history when only two companies (about 150 personnel) of the force stood their ground and repulsed a Pakistani brigade attack.

The force was tasked to secure the post seeing the aggressive posturing of the other side and the location was at a flat area, which was tactically disadvantageous.

On the intervening night of 8-9 April (1965), 3,500 men of the 51st Infantry Brigade of Pakistan, comprising the 18 Punjab Battalion, the 8 Frontier Rifles and the 6 Baluch Battalion, had stealthily launched a simultaneous assault on the Sardar and Tak posts under an operation code-named "Desert Hawk".

The combat lasted 12 hours, during which the Pakistanis made three attempts to overrun the Sardar post, but was repulsed with heavy casualties by some dare-devil action of the CRPF men.

The retaliation by the CRPF personnel saw the numerically superior and better-armed Pakistani side retreating the areas and leaving behind 34 bodies of their soldiers, including two officers. Four Pakistani soldiers were taken as hostages while six CRPF men made the supreme sacrifice and the post was saved.

The over three lakh personnel-strong force remembers all its slain men by observing "Valour Day" on April 9 every year.