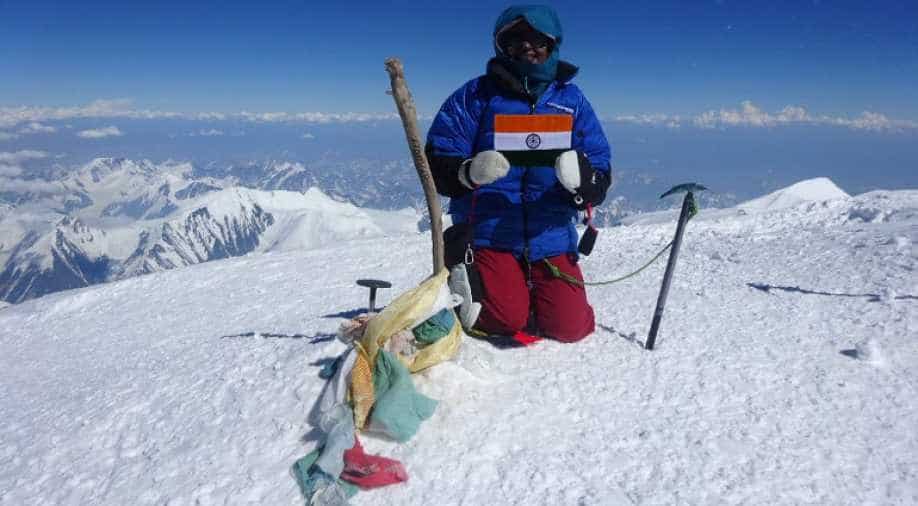 Aparna Kumar made headlines by scaling Mount Denali in Alaska, USA, and with this climb, she became the first( IPS) Officer and DIG in (ITBP) to climb North America’s highest peak and also the first IPS officer to complete the Seven Summits Challenge.

Emphasising the importance of our natural blessings and holding the accountability towards every action we do, Aparna Kumar speaks to WION and says that she is really worried about what we as human beings are contributing to maintaining the natural vibrancy of our environment.

Aparna Kumar made headlines by scaling Mount Denali in Alaska, USA, and with this climb, she became the first( IPS) Officer and DIG in (ITBP) to climb North America’s highest peak and also the first IPS officer to complete the Seven Summits Challenge ( challenge of climbing highest point in each of the 7 continents.)

In an interview with WION's Ayushi Agarwal, Aparna Kumar said that we should worry about what is happening around us and start doing it at a very young age to keep our mountains/glaciers protected.

Here are some excerpts of their conversations.

WION- As a passionate mountaineer, you must be holding a very special place for ice and snow. How do you feel about hearing and reading the studies predicting that the ice is melting at a very steady rate? What is your take on being to such places?

APARNA KUMAR- The drawback is completely visible. The places that I had visited is evidence of the fact that climate is changing and glaciers are receding at a very faster rate. But it depends on many factors. If you ask me about my experience, then I feel that I had seen many variations. For instance, when I went to Denali in late June, it was raining incessantly and snowing heavily. So it is all about variations. But yes, what we experience is because of the fact what we did in the past. The sudden change in climate is not an overnight variation, but it is our human activities that had led to such adversities and we must hold the onus.

Reading studies about climate change and coming across such news and data bothers me. As a mountaineer, I see effects everywhere. It is more visible now than it was before.  You can see more rock pieces now.  Even our guides who have been climbing for 15 years have themselves witnessed this drastic change. The ice is melting at such a faster rate. This is unfortunate.

WION- Climbers try hard to forge new routes to avoid litter and pollutants during climbing. Did you also witness litters and pollutants on your journey? What did you feel after witnessing such things?

APARNA KUMAR- My experience in witnessing such pollutants has been different in every mountain that I had scaled up. To me, Mount Denali has been one of the cleanest mountains that I have climbed so far. The National park service makes a lot of effort in keeping the mountain clean. Also, we have some set rules, like we get clean mountain camps in which we have to stick. They give us polythene covers which are inserted into these clean mountain camps, also known as CMC's, and once they fill up, we have to replace the polythene with a new one so that we can use that and these again will be brought down to the base camp and then out of the glacier. These are all biodegradable polythene covers and Everything is brought down and nothing is left on the mountains. So, this is a very strict rule and these park rangers of National Park service keeps on monitoring if we are sticking to the rules or not. Hence my experience in terms of cleanliness had been amazing on Denali.
If you ask me what I felt in the other mountains then I must say that apart from the Himalayas, every other mountain is very particular about keeping it clean.

One way I suggest that we can contribute to keeping the pollutants/litters out is by government/association designing the policies and imposing strict rules to maintain the blessing that we have in such forms.

WION - Climbing mountains are hit from climate disruption and global warming issues making things harder and deteriorating the natural vibrancy. How do you see this and what do you suggest on such cases as the process is slow and visible to the eyes of scientists?

APARNA KUMAR - See, we need to be very serious towards protecting our environment at a very young age. In India, we lack behind many countries in terms of cleanliness and keeping natural gifts secure. Hence we need to do this right from the very basic level to the advanced. For example, even if is our own house, we try pushing the garbage towards our neighborhood without understanding the fact that the process would be coming back to us. So we need to be very conscious and should start becoming a responsible citizen. This is I believe should begin by targeting young people who very well know how to take care of their things. Also, our education in some forms should include serious issues in the environment.

WION - In recent days, Everest and Nanda Devi have quite been in news. Be it for the bottlenecks in the peaks, body retrieval and plucking tonnes of garbage. What will you say about the traffic management?

APARNA KUMAR - Adventure has now been very popular. Everyone wants to climb Everest and peaks. But we need to understand that not everyone can climb mountains. You need to be very serious about it. The traffic that has been on Everest is a very serious issue. It is because every year on Everest, there is an unlimited number of people scaling up who are inexperienced, not acclimatize to the weather conditions and are not serious about mountaineering. This results in their illness and also death. The extreme weather conditions on any mountain do not favour everyone resulting in getting them back, alive or dead which is not at all an easy nut to crack. So, we need to come up with strictest rules to avoid bottlenecks and adversities.

Nanda Devi is again not so crowded. Very few people climb it because it is a very tough peak. The recent news that had come up was a freak accident and a natural calamity of an avalanche that killed all climbers.
The only way to reduce such calamities is by following rules and reducing human activities.

WION- You had recently made headlines by becoming the first IPS officer to reach the South Pole and now by scaling seven summits. Tell us more about your journey and how did you think of doing such arduous take?

APARNA KUMAR- Yes, it was a very gradual and step by step process. I first started climbing smaller mountains like Kilimanjaro and then taking up to the higher. The journey started in 2013 when I was posted as the Commander of 9th battalion PAC. It used to take care of high altitudes of Uttarakhand along the Indo-Tibetan border. People used to tell me about their adventurous stories and their experiences on walking on snow and pulling their sledge full of luggage. It made me curious about attempting it.

While my training began in 2013 when I did a basic mountaineering course from Manali. I was adjudged with A-grade, which made it possible for me to pursue an advanced mountaineering course which I completed in July 2014. The course made me eligible for expeditions. Shortly after, my training began. I knew I had to be physically and mentally strong as the task demands a lot of vigor. So before climbing up Everest, I had already climbed 7-8 peaks and then I thought of doing the Seven Summits.

WION- How did you feel after unfurling the Indian Flag once you completed your seven summits? One message that you want to give?

APARNA KUMAR- It was a big sense of relief because since past years, I have been trying hard to complete it but the extreme weather conditions sent me back home. This time I did it before the scheduled time.  So in the end, it was very relieving and also I was happy in becoming the first one/Indian among my group of climbers to get it done in a foreign country.

One message that I want to give is to hold the onus of our deeds. We should start taking our biodiversity very seriously otherwise one day, everything around us will perish!