LJP makes public its unease with BJP over Ram temple 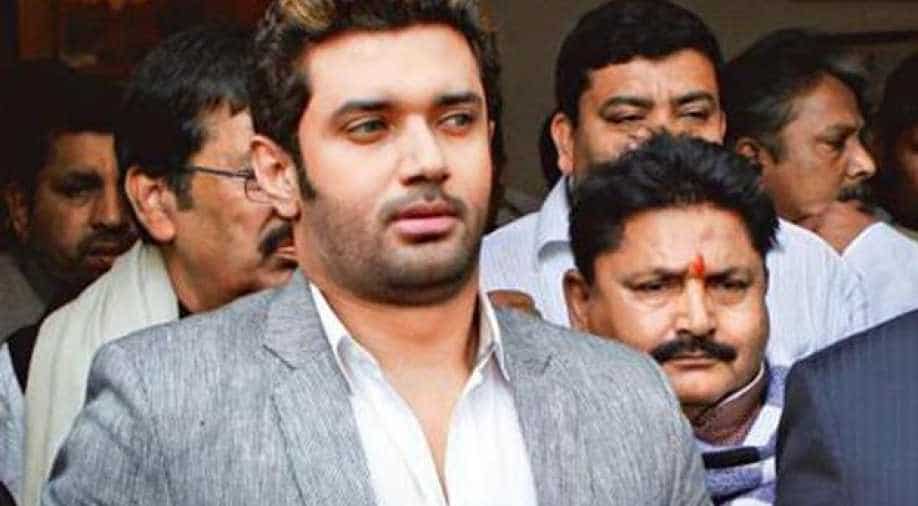 LJP leader Chirag Paswan, while being critical of the BJP, praised Congress President Rahul Gandhi, saying he had raised "real" issues of the youth and farmers, which fetched his party victory in the recently-held Assembly elections in Rajasthan, Madhya Pradesh and Chhattisgarh.

Key NDA ally Lok Janshakti Party (LJP) on Wednesday made public its unease with the BJP, saying it had digressed to "non-issues" like Ram temple and demanded urgent steps to return to the "real issue" of development.

LJP leader Chirag Paswan, while being critical of the BJP, praised Congress President Rahul Gandhi, saying he had raised "real" issues of the youth and farmers, which fetched his party victory in the recently-held Assembly elections in Rajasthan, Madhya Pradesh and Chhattisgarh.

Chirag Paswan, the son of LJP chief Ram Vilas Paswan, told ANI that the BJP lost the Assembly elections because it failed to address the issues of farmers and youth unemployment and emphasized on Ram temple only.

"We have few concerns. All the allies have their concerns. It's for the biggest party in our alliance, the BJP, to address the concerns," he said.

He specified that seat-sharing "is not an issue at all" and "It will be too early to talk about going out of the alliance."

At the same time, he said, "The NDA was voted to power in 2014 on the issue of 'sabka saath, sabka vikas' (cooperation to all, development for all). The youth, the farmers had supported our government. But recently, non-issues have dominated over the real issues, because of which we had to suffer losses in these (Assembly) elections."

The 35-year-old MP from Bihar said, "The youth have no jobs, farmers are committing suicide and are indebted. The result of three states proves that it's important for the BJP to address these concerns, which the BJP is not being doing."

Emphasising that the "agenda of our government is and should be development," he said, "when the agenda gets diverted and other issues like Ram Mandir start taking over, such failures are bound."

He said the LJP has put forth its views before the BJP considering itself a "life partner" of the NDA and expressed hope that "our issues will be addressed at the earliest."

He underlined that there is an urgent need for the BJP to return to the issue of development like in 2014 by keeping way the issues like Ram temple.

He said the BJP and its allies need to restrategise their policy ahead of the Lok Sabha elections due by May next year.

Referring to the recent Assembly polls, Paswan said Ram temple and Hanuman were made issues while on the other hand, the opposition raised the voice for farmers and the youth, which gave them benefits.

"We are not against the Ram temple. That is in the manifesto of the BJP," he said.

Talking about Rahul Gandhi, he said, "There has definitely been a positive change in him."

He said credit must be given to him for the Congress party's victories after a long time.

He said Gandhi has been criticised several times for his party's defeat in elections but now since under his leadership, the party has been victorious, he should be praised.

"If you criticise someone, you should also appreciate them when they perform well. They chose issues well," Paswan said about Gandhi.

He said Gandhi raised "real issues" as he spoke about farmers and the youth, which benefitted the Congress in the elections."The manner in which they raised the issue of farmers and unemployment, I feel they chose well and we stayed tangled in religion and temples. I urge the government that we should focus once again solely on development in the time to come," Paswan said.