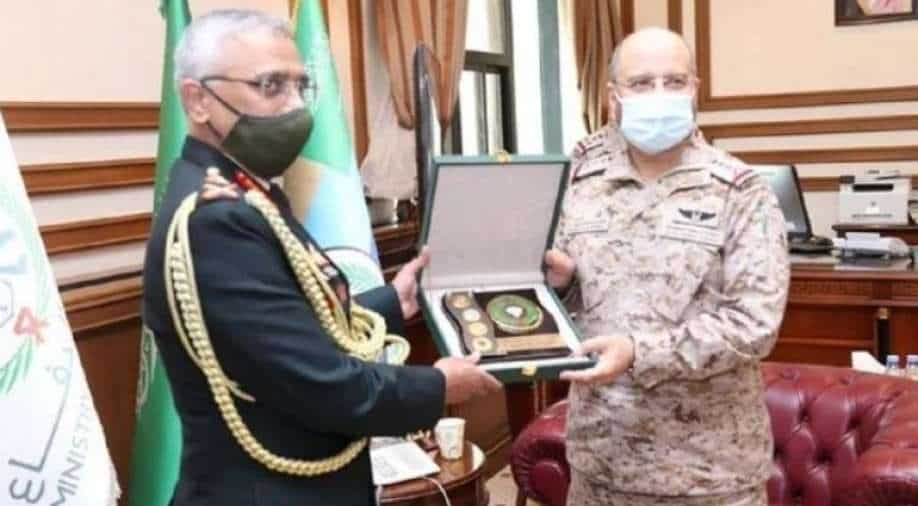 On Friday, General Naravane received a guard of honour at the headquarters of UAE's land forces

Pakistan has been slowly slipping from the good books of the Arab nations, especially Saudi Arabia — the de facto leader of the Islamic world. This can be proved through the dissection of two high-profile and very similar visits that stand as proof of the Saudi-Pakistan breakup that also reaffirm how Saudi Arabia along with the UAE  is increasingly leaning towards India.

In August, the Pakistan army chief, General Qamar Javed Bajwa travelled to Riyadh. The visit followed weeks of posturing by Islamabad on Kashmir. Bajwa went there expecting the sheikhdom to take a firmer line against India's policies in Kashmir. In fact, the Saudi crown prince was expected to give the Pak army chief an audience, a loan concession and a medal. However, all he received was a royal snub as the Saudis changed their mind and he didn't get to meet Mohammed Bin Salman. This also meant there was no loan concession and obviously no medal.

General Bajwa, much to his dismay, had to settle for customary meetings with the Saudi officials and he returned to Islamabad empty-handed.

Now, four months later, the Indian army chief, General Manoj Mukund Naravane has embarked on a six-day long tour of West Asi, making it his third foreign tour this year and the first visit by an Indian army chief to this part of the world. The purpose of the visit was to create a military alliance with the two gulf powers.

On Friday, General Naravane received a guard of honour at the headquarters of UAE's land forces. During his trip, he also held talks with the commander of land forces, Major General Saleh Mohammed Saleh Al Ameri and discussed defence cooperation between India and UAE. The army chief also visited the land forces institute and its infantry and armour schools.

On Sunday, he arrived in Saudi Arabia and visited the ministry of defence in Riyadh where he received a guard of honour by the royal Saudi land forces and met top Saudi generals such as Saudi Arabia's chief of staff General Fayyad Bin Hamid Ruwaili and the commander of Saudi Arabia's joint forces General Mutlaq Bin Salim Bin Al-Azima. The discussions largely revolved around ramping up defence cooperation in strategic areas.

The stark contrast between these two visits of India and Pakistan is clearly visible where Pakistan's General receives a royal snub and a red carpet is rolled out for the Indian General. This contrast proves that New Delhi has not only managed to delink Islamabad from the Arab world but is set to become a major security partner of the Gulf powers.

Reports around General Naravane's visit to the gulf have highlighted a potential sale of the Brahmos missile. Both, Abu Dhabi and Riyadh have reportedly shown interest in buying the Indo-Russian missile system. A number of other proposals are also on the table such as joint military exercises.

In recent years, the Indian navy has held drills with UAE and Saudi Arabia. In March 2018, India and the UAE conducted their maiden naval exercise "Gulf star 1" and in 2019, India and Saudi Arabia announced their first joint naval drills — which were delayed to the coronavirus pandemic. General Naravane's visit could lead to a rescheduling of these drills.

Reports also indicate that Indian contingents could soon be sent to Saudi Arabia and the UAE for the protection of the house of Saud. Over the years, thousands of Pakistani troops have been sent to the royal kingdom. Elite Pakistani commandoes have been tasked with guarding the royal family in Riyadh but Islamabad has refused to allow Pakistani troops to join Saudi and Emirati troops in Yemen.

Reports say the Gulf powers now want India to be on board in Yemen. Indian contingents could be sent to join troops in Yemen as Islamabad is made to pay back its loans.

Pakistan's Geo news carried out a report on Monday titled, "china bails out Pakistan to replay $1 billion Saudi debt". Pakistan has been forced to pay another tranche of a $3 billion loan it borrowed from the sheikhdom, and much like last time, China has again come to Pakistan's rescue.