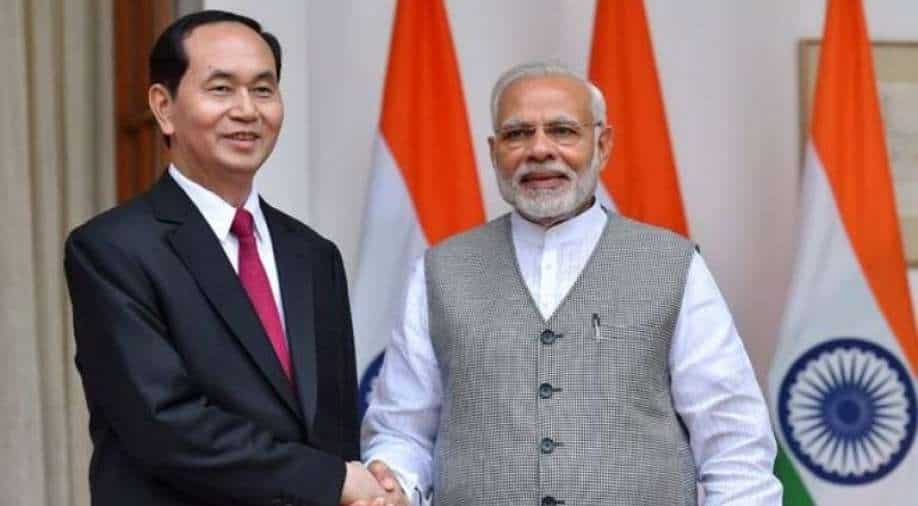 The handing over happened at the virtual summit, between Indian Prime Minister Narendra Modi and Vietnam's PM Nguyễn Xuân Phúc during which both sides also launched manufacturing of High-speed Guard Boats and keel laying of 7 such boats which will be manufactured in Vietnam

India on Monday handed over the first of 12 High-Speed Guard Boat to Vietnam under the $100 million Defence Line of Credit extended by New Delhi to Hanoi.

The handing over happened at the virtual summit, between Indian Prime Minister Narendra Modi and Vietnam's PM Nguyễn Xuân Phúc during which both sides also launched manufacturing of High-speed Guard Boats and keel laying of 7 such boats which will be manufactured in Vietnam.

While listing out the outcomes on defense at the summit, secretary east, Riva Ganguly Das said, "Both sides agreed to further intensify their defense industry collaboration building on the Indian defense credit lines extended to Viet Nam. An Implementing Arrangement on Defence Industry Cooperation was also signed to this effect."

Key focus areas were also on development projects and culture. India handed over seven development projects built with Indian ‘Grant-in-Aid’ Assistance of US$ 1.5 million for the local community in Vietnam's southeast Ninh Thuan province. Additionally, New Delhi has increased the number of Quick Impact Projects to 10, from the current 5 starting FY 2021-2022.

On the cultural front, India will be part of the conservation of 3 historical sites in the ASEAN country--F-block of Temple at My Son, Dong Duong Buddhist Monastery in Quang Nam province, and Nhan Cham Tower in Phu Yen province. India's Archaeological Survey team is already working on the restoration of Cham temples in Central Vietnam where recently a 9th century AD monolithic Shiva Linga was discovered. Both sides also announced the launch of a bilateral project for preparing an Encyclopedia on India - Vietnam Civilizational and Cultural Relations

But perhaps, an outcome that Beijing will keenly note is the mention of UNCLOS in the India Vietnam Joint statement --Joint Vision for Peace, Prosperity, and People.

The vision document said, "leaders reaffirmed the importance of maintaining peace, stability, security, and freedom of navigation and overflight in the South China Sea" while "pursuing the peaceful resolution of disputes in accordance with international law, particularly the 1982 United Nations Convention on the Law of the Sea (UNCLOS), without resorting to threat or use of force."

UNCLOS or United Nations Convention on the Law of the Sea was violated by China in 2016 by not accepting the award of the tribunal constituted under it.  The tribunal had dismissed the Chinese claim to a large portion of the South China Sea-based on its so-called "nine-dash line".

On the South China Sea which has seen an increased Chinese aggressiveness and attempts to unilaterally stake claims, the statement said, "Both leaders underscored the importance of non-militarisation and self-restraint in the conduct of all activities by claimants and all other states, and avoidance of actions that could further complicate the situation or escalate disputes affecting peace and stability.".