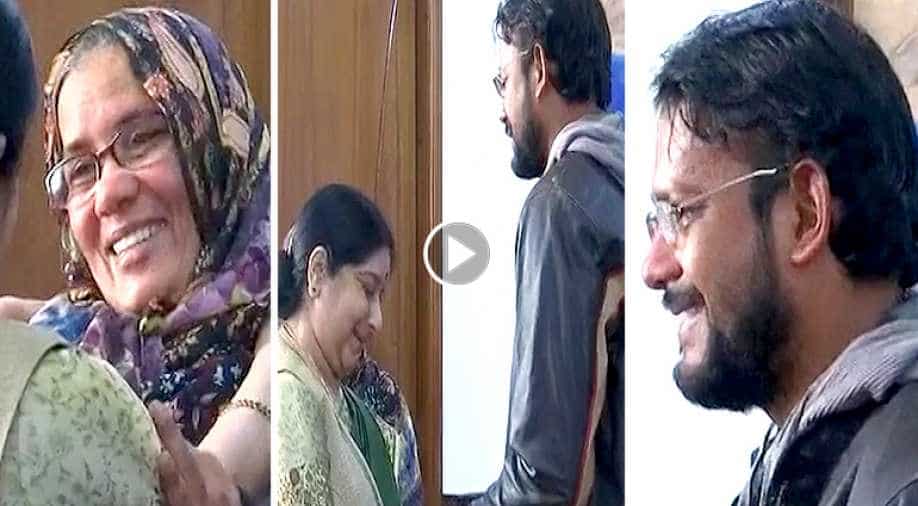 Ansari went missing after he was apprehended by the Pakistan intelligence agencies and local police from Kohat district in Khyber Pakhtunkhwa province of Pakistan in November 2012.

Hamid Nehal Ansari, who was, who was released on Tuesday from Mardan Central Jail of Pakistan, met with External Affairs Minister Sushma Swaraj on Wednesday in New Delhi.

Ansari reached Delhi early morning the same day. He told reports upon landing that he is very happy to be back home.

Having been detained and imprisoned in Pakistan for a total of six years over charges of espionage, 33-year-old Mumbai-based Hamid Ansari returned to India on Tuesday.

A former teacher at the Mumbai Management College, Ansari went to Pakistan in 2012 to meet a woman whom he had befriended through social media.

Ansari went missing after he was apprehended by the Pakistan intelligence agencies and local police from Kohat district in Khyber Pakhtunkhwa province of Pakistan in November 2012.

He was awarded a three-year imprisonment sentence by a military court in December 2015 after being slapped with charges of espionage and involvement in anti-state activities.

The court gave the verdict after Pakistan`s Ministry of Interior appraised that Ansari will be repatriated to India after completion of his prison term on December 15.

Pakistani security agencies had claimed that Hamid had used fake identity card in the name of "Hamza" and had entered Pakistan through Afghanistan without travel documents.