From Aadhaar to trade and commerce: Here's what PM Modi discussed with ASEAN leaders 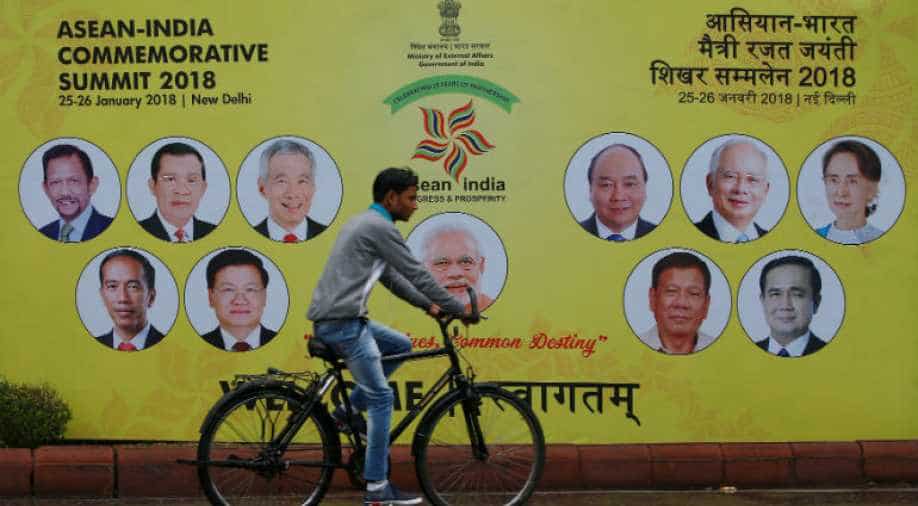 A cyclist rides past an ASEAN-India Commemorative Summit billboard the side of the road in New Delhi. Photograph:( Reuters )

Prime Minister Narendra Modi is holding bilateral meetings with the leaders of all 10 ASEAN countries who have gathered in New Delhi to join him in the Republic Day celebrations. This will be the biggest ever gathering of foreign leaders at the Republic Day parade that showcases India's military might and cultural diversity.

Under its 'Act East' policy, New Delhi is pushing to boost its relationship via connectivity, commerce and culture with this regional bloc.

The Philippines also showed interest in studying and implementing a digital identity system inspired by India’s Aadhaar and the software stack built around it. According to sources, the Philippines has sent queries for details to know about the Aadhaar details.

Modi visited the Philippines in November last year to attend the ASEAN-India Summit. It was the first prime ministerial visit from India to that southeast Asian nation in 36 years since the visit of then Prime Minister Indira Gandhi in 1981. During that visit, the two countries signed a defence cooperation agreement, including in the area of off-shore patrol vehicles. The Filipino defence minister is expected to visit India soon for further talks.

Modi and Duterte agreed to encourage their private sectors to collaborate as part of India's 'Act East' policy and the Philippines's Build-Build-Build programme.

The meeting assumes significance in the wake of the exodus of Rohingya refugees from the Rakhine state in Myanmar to Bangladesh since August last year.

Modi also met his Vietnamese counterpart Nguyen Xuan Phuc. After the meeting, India and Vietnam signed agreements in the areas of information and broadcasting, and space cooperation.

According to Kumar, Modi and Phuc "discussed cooperation in trade and investment, defence, maritime and other areas".

During Modi's visit to Vietnam in September 2016, the India-Vietnam relationship was upgraded to Comprehensive Strategic Partnership which Hanoi only has with Moscow and Beijing. India also plans to share the BrahMos missile system with Vietnam.

India and the Southeast Asia nations have stressed the need for freedom of navigation and open seas and India already has strong naval ties with countries such as Singapore, Vietnam, Indonesia, Thailand and Malaysia.

But several Southeast Asian countries locked in territorial disputes with China have sought even greater Indian engagement in the region, experts say.

"China's distinctly hegemonic moves in the last few years in the South China Sea and its growing assertiveness have made ASEAN look towards India as a partner for equilibrium," said Arvind Gupta, former Indian deputy national security adviser who now heads the influential Vivekananda International Foundation in New Delhi with close ties to the ruling government.