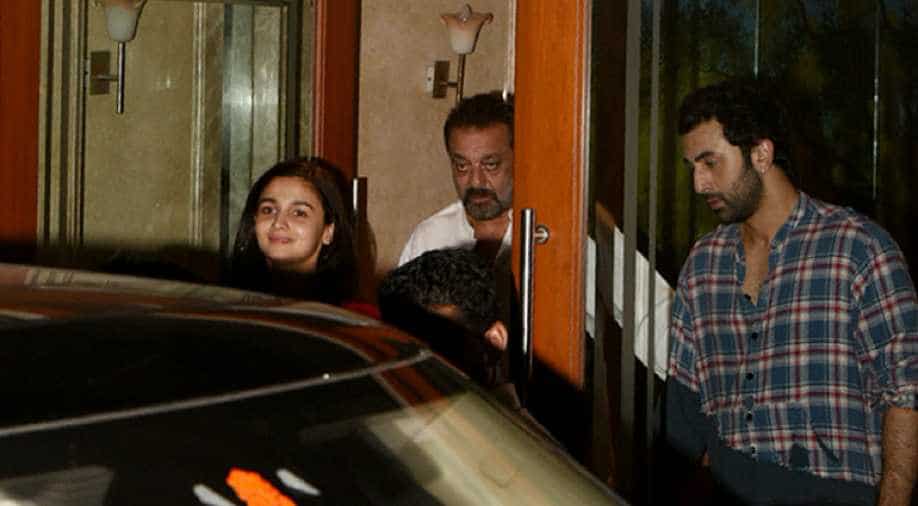 New couple in town, Alia Bhatt and Ranbir Kapoor were spotted leaving Sanjay Dutt's house on Wednesday night. Dutt himself stepped out of his house to see them off. Accompanying the couple was Alia's best friend Akansha Ranjan.

Earlier in the evening, Alia and Akansha were spotted at a suburban restaurant on a dinner date.

The girls later joined Ranbir at Rishi Kapoor's residence where Sanjay Dutt was also present. The party later continued at Sanjay Dutt's house and Alia, Ranbir and Akansha left together in the same car later from there.

When Ranbir and Alia spotted the shutterbugs waiting outside Dutt residence, they both turned their faces away from the flashbulbs. The two have been shooting for Ayan Mukherji's Brahmastra where love blossomed for the two. Ranbir at a recent interview called his relationship 'new'. The actor, during a Twitter interaction recently, while promoting 'Sanju' said he would also like to get married 'soon'.

Last week, Alia and Ranbir stepped out with Ranbir's mother, Neetu Kapoor, his sister Ridhima Kapoor and his niece Samara for dinner at a restaurant in Mumbai.

Ranbir will soon be seen playing Sanjay Dutt in his biopic 'Sanju'. Sanjay Dutt has reportedly heaped praises on Ranbir Kapoor for essaying him on the big screen so well. 'Sanju' directed by Rajkumar Hirani is releasing in theatres on June 29th.