Confusion being spread about support price to farmers: PM 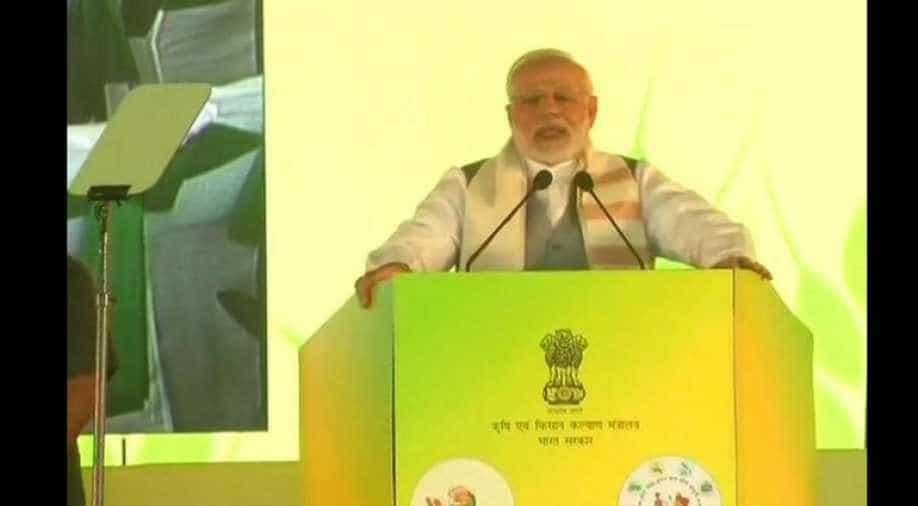 In an apparent attack on opposition parties, Prime Minister Narendra Modi today said confusion is being spread about the budget decision to fix MSP for crops, at least 1.5 times the production cost, and assured farmers that all major costs incurred will be included while declaring the support price.

The Centre is already working with state governments to ensure that farmers get the benefit of the declared Minimum Support Price (MSP), he said.

Addressing a three-day Krishi Unnati Mela 2018 here, Modi also appealed to farmers not to burn crop residues so as to curb pollution.

Besides, he asked farmers to grow more oilseeds to reduce dependence on import of cooking oil as also to cut urea consumption by at least half by 2022.

In the Union Budget 2018-19, the government took a decision to ensure right prices to farmers for their produce, he said.

It has decided that for all notified crops, MSP will be at least one and a half times the cost, Modi said.

Many people are "spreading confusion and creating atmosphere of despair" regarding the government's MSP decision, he said while sharing the detail of components to be considered while determining the cost of production for fixing the support price.

"The cost of production will include elements such as hired labour, expenses on their own or rented machinery as well as livestock, cost of seeds and fertilisers, expenses on irrigation, revenue being given to state government, interest on working capital, and rent of leased land among others," he said.

It will also include labour put by farmers and their family, he said. "This is an important decision related to income of hardworking farmers."

Finance Minister Arun Jaitley had said that the government will consider A2+FL which includes paid out costs on inputs and imputed value of family labour. However, a section of farmers' organisations have been demanding the comprehensive cost (C2) that also includes imputed rent and interest on owned land and capital, over and above A2+FL.

After the Prime Minister's speech today, when contacted, Niti Aayog member Ramesh Chand said, "What the PM talked about was A2+FL. He shared the components of the cost. It is a comprehensive subject and not many people know about it. The PM tried to explain in detail."

Stating that the government is working to strengthen agri-marketing in a big way, Modi said the efforts are being made to link rural mandis to APMC wholesale markets to global market to enhance farmers income.

In the recent Budget, Grameen Retail Agriculture Markets have been envisaged. 22,000 rural haats will be upgraded with necessary infrastructure, and integrated with APMC and the e-NAM platform, he said.

Farmers can market their produce in a better way through Farmers Producer Organisations (FPOs), which has been exempted from income tax, on the lines of cooperative societies, in the Budget, he added.

Modi, who also launched e-marketing portal for organic products, said this platform is a new chapter in agri-marketing reform. This will be a huge benefit to farmers.

To reduce input costs, the government has taken various steps like soil health card and neem coating of urea besides completing pending irrigation projects with an outlay of Rs 80,000 crore.

Stating that the farm sector is facing challenges affecting farmers income, he said, the government is working with a holistic approach to deal with these challenges and is committed to double farmers income by 2022 and making their lives easier.

For the farmers' welfare, Modi said that the centre has framed many model acts and urged the states to implement them.

"Government is making all out efforts to ensure that farmers get latest seeds, required electricity, do not face any problem in market access and get right prices for their produce," Modi said.

More than 800 stalls have been set up by the central and state governments and various other organisations in this fair.