Anti-BJP posters surface ahead of Amit Shah's rally in Kolkata 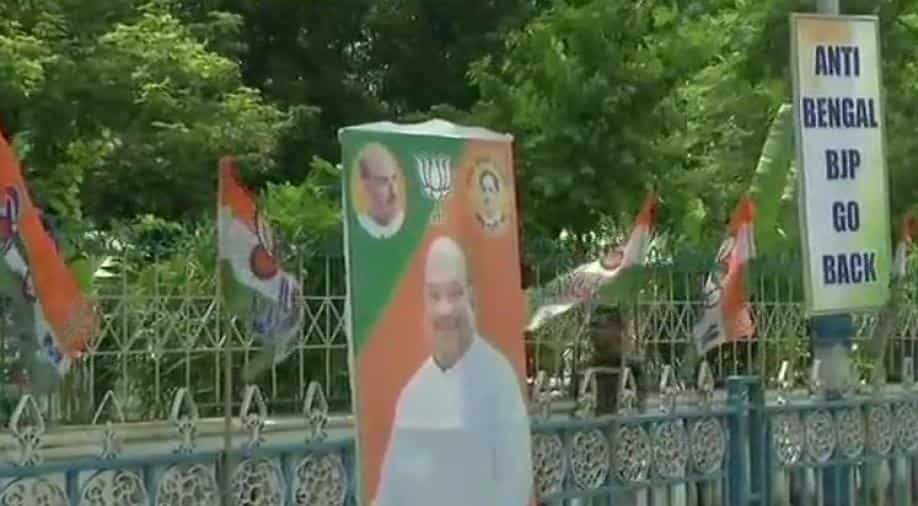 The posters were put up around Mayo Road where Shah will address the public rally today.

A day before BJP's national secretary Kailash Vijayvargiya and P Muralidhar Rao went to Mayo Road and took stock of the preparations and security arrangements for Shah's rally.

Earlier reports had said that the Kolkata government had denied permission to the BJP for oraganising the rally in the city. The reports were later refuted by the Kolkata police.

Responding to such reports, Shah had made it clear in Delhi that he would not only go to Kolkata but is even prepared to get arrested.

Shah said, "It does not matter whether I get permission or not, I will definitely go to Kolkata.

If the state government wants, it can arrest me."However, Kolkata Police on August 1 announced that Shah has been granted permission for a public rally in Kolkata.

Meanwhile, West Bengal's ruling Trinamool Congress has decided to hold protest rallies in other districts of the state to oppose the National Register of Citizens (NRC).

Secretary-General Partha Chatterjee said that the protests were staged to demand the inclusion of the Bengali speaking people in the NRC.

He further said that the protest rallies will be carried out in West Bengal but not in Kolkata adding that the party would take out a rally in Kolkata on Sunday.

From past few days, the confrontation between the BJP and the Opposition has been undergoing over the release of the National Register of Citizens (NRC) draft list in Assam on July 30, which has left out nearly 40 lakh people in Assam while incorporating names of 2.89 crore people out of 3.29 crore applicants.

Accusing the BJP of vendetta politics, she had said that the party was targeting people in the wake of general elections scheduled in 2019. She has also accused the BJP of conspiracy against minorities.