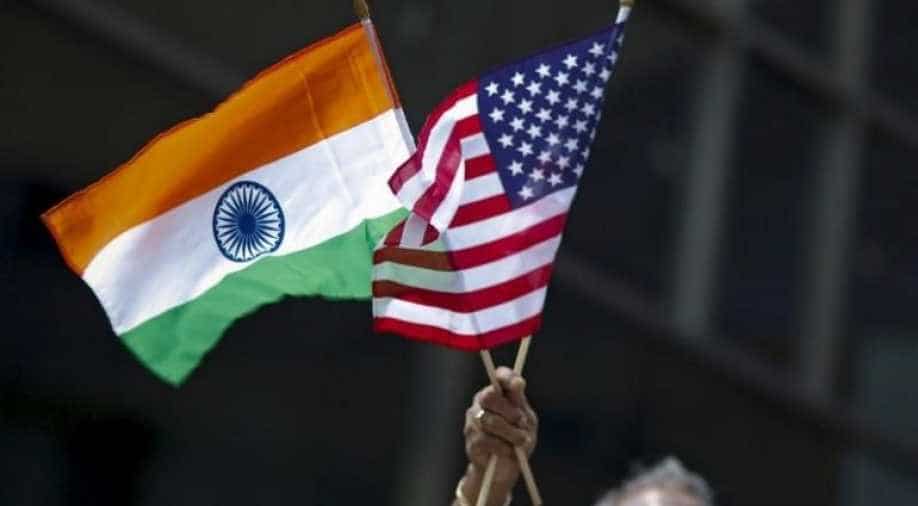 A man holds the flags of India and the US while people take part in the 35th India Day Parade in New York August 16, 2015. Photograph:( Reuters )

India, Aghi asserted, has "a fantastic opportunity" to attract US and European\ companies as China trade relations get strained with its partners.

Exploring the possibility of developing India as an alternative in the midst of a US-China trade war, the American corporate sector eagerly looks forward to the election results and hopes that the new government adopts a "consultative process" in framing policies, experts say.

"US companies are looking for transparency and consistency in the policy framework. They would appreciate a consultative process (in) framing policies," Mukesh Aghi, president of the US-India Strategic and Partnership Forum said, ahead of the declaration of the election results on May 23.

India, Aghi asserted, has "a fantastic opportunity" to attract US and European\ companies as China trade relations get strained with its partners.

"These companies would consider India if ease of business improves along with predictability, otherwise countries like Vietnam and Cambodia are successfully attracting these companies," Aghi said in response to a question.

The new government will need to look closely at what it can do to unleash growth and create jobs because India must tackle its own apparent economic slowdown, Alyssa Ayres, from the Council on Foreign Relations think tank, told PTI.

"Economists have long recommended structural reforms as the way to do that which would likely help India address the complaints from the US and others about difficulties of doing business in the country," Ayres said in response to a question.

Although the final results are yet to be declared and may hold some surprises, there are several issues that whoever comes to power would need to grapple with, observed Anit Mukherjee, a policy fellow at the Center for Global Development, a think tank in Washington DC.

But the broad theme would be on the consolidation of the gains of the past five years and ushering in some much-needed reforms to accelerate growth and reduce poverty, he said.

Noting that India's economy has gone through a period of consistent, if not spectacular, growth over the last five years -- this in spite of demonetization, GST, and the NPA and farm crises — Mukherjee said this provides a platform for higher growth in the next five years.

"But this will depend largely on how the government can steer the macroeconomy, streamline GST, address non-performing assets and mitigate the farm crisis," he said.

There will be headwinds oil prices are increasing, external trade environment is hostile, vested interests have scuttled plans to reform PSU banks, and the government does not seem to have much appetite to reform agricultural markets apart from announcing a cash transfer programme just before the elections, he added.

India, he said, is going through a rapid digital transformation. Aadhaar is now almost universal, its use is now pretty well defined following the Supreme Court judgement, Mukherjee said, adding that India's financial inclusion is now among the highest in the world (over 80 per cent), thanks largely to the Jan Dhan program; and mobile phone use is ubiquitous, serving a data-hungry population.

"So the building blocks of a digital economy is in place and India is poised to take a big leap in the next five years. The government needs to recognise that and bring policy and regulatory clarity, especially data sharing, trade in data services and privacy protection," he said.

Observing that India's rise as an economic power comes with responsibilities, Mukherjee said New Delhi would do well to learn the lessons from China, which is facing a backlash over its trade and investment policies, as well its domestic policies favouring large technology firms that are perceived as a threat (eg. Blacklisting of Huawei for 5G telecom equipment and Google's decision not to allow future Android OS updates to run on Huawei smartphones).

"India has so far refused to engage with the US and the EU on the global E-commerce and data governance architecture but it would do well not to be sidelined in the discussions," he said in response to another question.

"It is in everyone's interest that India becomes a hub of digital innovation and commerce, with a level playing field that does not discriminate in favour of any particular special interest group," Mukherjee said.